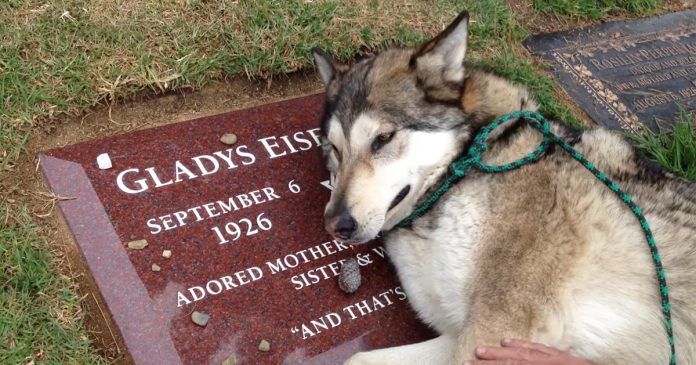 Wiley the wolf-dog had always been very close with its late owner, Gladys that he had such a hard time to accept that she had gone forever.

A heartbreaking video shows the grieving dog sobbing terribly at Gladys’ grave as he lays sadly on her tombstone.

The video which has moved thousands of hearts of its viewers shows Wiley crying and appears to be shaking as the family members gather around him.

In one shot, one of the family members can be seen reaching out to comfort sobbing Wiley and says, ” We miss her too.”

The video has garnered more than 9,174,611 views since it was posted on YouTube by user SarahandtheWolves.

According to the YouTube channel, SarahandtheWolves, Wiley is one of the service wolf-dogs which offer help to veterans who suffer from Post Traumatic Stress Disorder after they returned from the war.

The service wolf-dogs provide the veterans therapy and care through LARC, the Lockwood Animal Rescue Centre that specializes in the care of wolf-dogs and horses.

The user also provided an explanation to brush off any concerns regarding Wiley’s health.

“I am not a vet so I can’t say if he’s reverse sneezing as some of you are stating,” SarahandtheWolves wrote.

“I can tell you that he has never done that before and hasn’t done it since. I may be anthropomorphizing his actions but its how I’m choosing to deal with loss…”

“Also, for those stating he is dying, I promise he’s not. We have a veterinarian on staff at the sanctuary and Wiley is just fine.”