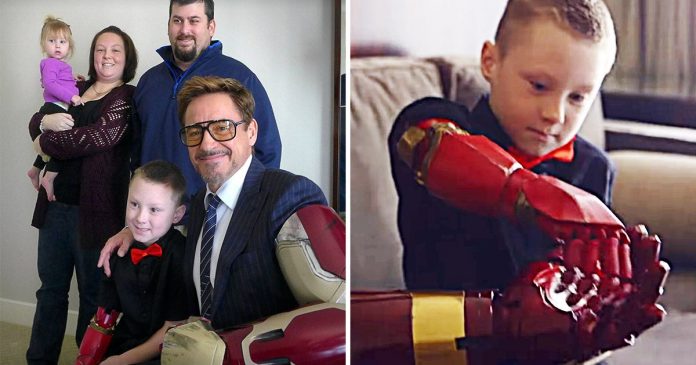 The real Iron Man might be 7-year-old Alex Pring as the boy owns a real bionic arm that looks exactly like it belongs to the iconic fictional superhero.

Even more special, the bionic arm was given by the one and only the actor that plays the character itself, Robert Downey Jr!

The Iron Man star has personally surprised young Alex who is disabled with a 3-D printed bionic arm.

The young boy was born with a deformed right hand but now he is finally able to pick up objects and use his right hand with the bionic arm.

The bionic arm is equipped with a sensor that detects movements in his biceps and a battery that can last the whole day.

Robert himself delivered the bionic arm to the boy as Tony Stark.

The actor also made a joke that Alex’s bionic arm was better than his as its lights kept flickering.

The bionic arm was created by Albert Manero, a Fulbright scholar and doctoral student who created the prosthetic arm that has cost only US$350 compared to the traditional ones that can cost up to US$40,000.

The star also said that he might hire Albert to provide more of the affordable yet high-quality 3-D printed arm to disabled people.

The life-changing creation is a part of Microsoft’s Collective Project which aims at bringing positive changes to the community.

Watch the heartwarming meeting between Alex and Robert here

Since 5yo, girl from Pennsylvania helped raise millions to fight malaria