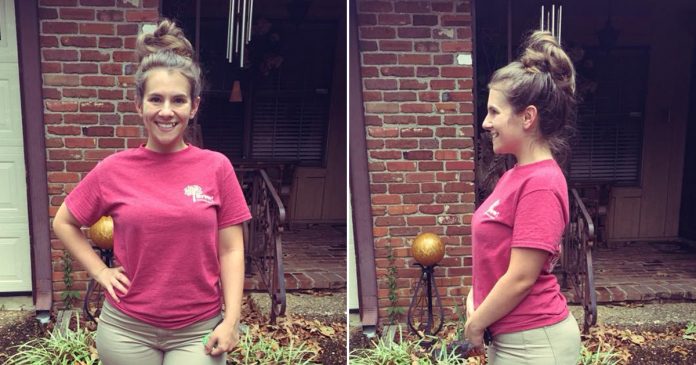 Alyssa Stringfellow from Arkansas was applying to be added to her mother’s car insurance policy and was asked to send several photos of her car to the company. However, she misread the instructions which resulted in a super hilarious email.

The 25-year-old woman said that her mother needs her to send the insurance company some details about her driver’s license, date of birth and several pictures of her car.

“A picture straight on and a picture taken from each side”, the mother said to her daughter.

“She gave me his email address and I emailed the information along with the pictures that night,” Alyssa explained. So, she sent the details required along with the photos as she was told.

“The following day, I check my email and find THIS response: ‘Hi Alyssa, I am going to need pictures like you just took, except it needs to be of your vehicle. :)’,” she said.

It turned out that Alyssa has misread her mother’s instruction and sent several photos of herself instead of her car!

Alyssa later realised that she has made a very embarrassing mistake but she admitted that it was hilarious.

At first, she was not sure to share the funny incident on Facebook. “But I have decided to go ahead and share my really, really…REALLY blonde moment with you guys,” she wrote on Facebook.

Following the hilarious email, her mother later reached out to her.

“Alyssa Rachael, did you send him pictures of YOURSELF!?” she wrote in a text message. “It was supposed to be of your car!”

Apparently, the insurance agent called her mother and talked to her about what Alyssa sent through the email. The two shared a long laugh about the photos.

“Needless to say, I was ridiculously embarrassed, and everyone at work had a good laugh at my obvious misinterpretation,” she added.

“The crazy thing is, I asked my mom to take the pictures after I got off work, and we discussed why in the world he would need pictures of me, never once considering it was supposed to be of my car.”

“But, you know what they say, you either have book smarts or street smarts, and I definitely do not have the latter!” she continued.

Alyssa’s grandmother also gave a witty comment regarding the woman’s misinterpretation. “He’s insuring the car, not you,” her grandmother said.

Even though it was an embarrassing incident for Alyssa, many people commented on her post that they might have done the same.

“Only laughing cause I would do this,” Mallory Sisson wrote in the comments.

“Don’t feel bad! We all have those moments. All we can do is shake our heads and say, God, what was I thinking!” another person wrote.

Ever since she posted the story on November 2, it has gone wildly popular on Facebook as it has gained 11,000 likes and 11,000 comments.