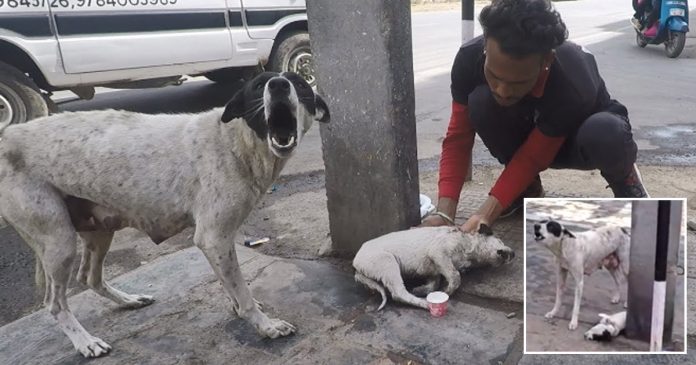 All animals deserved love and protection including the stray ones. That is what Animal Aid Unlimited believes and strives to do since 17 years ago.

Hence, when they got a call from the public saying a badly wounded puppy was found lying on a roadside, the animal rescue organization quickly rescued the puppy.

In a video that has caught the attention of more than 1.3 million viewers, a mother dog is desperately asking for help after her puppy unable to move.

Luckily, rescuers from Animal Aid Unlimited were there to rescue the injured puppy.

One rescuer can be seen gently lifting the puppy and carries it to the back of an ambulance.

After a careful examination, it appears that the puppy has two deep wounds near its neck.

“She didn’t stop trying desperately to communicate as we gently lifted her puppy who had two deep wounds and placed him in the ambulance.”

“We couldn’t bring her along because she had 4 other babies to watch over. We would try our best to save her sweetheart and bring him home, and how we wished and hoped she would somehow understand.”

They later clean and treat the wounds. However, the puppy faces some struggles to walk due to the injuries.

“Her little one was so brave, and never struggled throughout his wound dressings. But he had a lingering problem: the wounds hurt him so badly he couldn’t walk for several days.”

Thanks to the rescuers, the puppy then manages to regain its health and is able to walk on its own just a few days later.

It is not hard for the rescuers to fall in love with the adorable puppy whom they later named Toggle.

However, they know that Toggle’s parents have been waiting for him to come back home.

The video then continues by showing one of the rescuers climbing over a gate where Toggle’s mother is waiting with her other puppies.

The two may not be separated for long but it is clear that Toggle has been missing his mother as it runs straight into her.

The heartwarming reunion has received more than 68,000 likes and 4,615 comments since it was posted on YouTube.

Animal Aid Unlimited was founded in 2002. The Indian animal rescue organisation is based in Udaipur, Rajasthan and is on a mission to rescue and treat street animals.