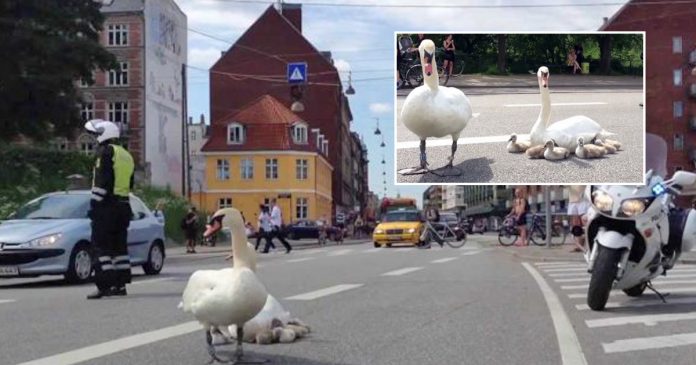 When this adorable swan family decided to take a quick pitstop in the middle of a road in Copenhagen, Denmark, a police officer kindly stood in to control traffic so they wouldn’t be injured!

Mama and papa swan and their six feathered babies appeared to take a detour as they chilled in the middle of the road on Christianshavn.

Mama swan makes herself comfortable as she perches peacefully on the road surround by her six babies.

Papa swan, however, looks a lot more serious as he waddles around in front of her, making sure he protects his precious family.

He doesn’t want any harm to come to them, and is on guard!

When this kindhearted police officer spotted the adorable family relaxing on the road, he immediately went to stop traffic and divert the cars around the beautiful bird family!

There was no way he was going to let a single vehicle go near the swans.

After all, every animal deserves to be cared and looked after in times of need.

And it’s no surprise—as the swan is actually Denmark’s national bird!

In 1984, the Mute Swan replaced the Skylark as the national bird of Denmark after popular vote by a Danish TV show.

The bird is native to Denmark and is the main character of the novel “The Ugly Duckling” by Danish author and poet Hans Christian Andersen.

The swan family decided to rest roadside for quite a while.

But after the swan family had enough excitement of chilling on the road, they all made their way back home to take a refreshing dip in the lake together—how sweet!

Watch their adorable little journey in the video below: