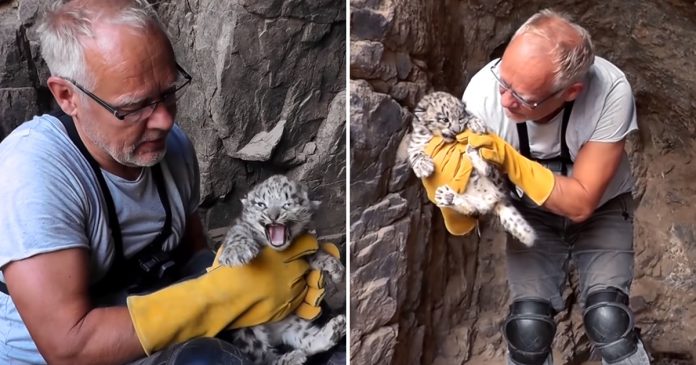 They are of the many animals that are at risk of going extinct but thanks to these cuddly cubs, scientists might be able to find a clue on how to help preserve this majestic creature.

Meet these rare and beautiful snow leopard cubs which are only a few months old.

While waiting for their mother to return to the den with some food, the scientists take the rare opportunity to study the cubs.

Snow leopards have been listed as one of the endangered species on the IUCN Red List, no thanks to the extreme threat from mining and poaching.

To help increase the population of snow leopards, The Snow Leopard Conservation Foundation Mongolia has been monitoring the rare cats for months and the mother of two cubs is one of them.

The foundation considers female snow leopards with cubs are especially valuable to their studies as the data about the cubs can help scientists to know at which age snow leopards first conceive their cubs.

The data also helps scientists to study about the cubs’ sizes as well as their survival rates.

The adorable snow leopard cubs are tagged with small chips which allow them to be tracked.

The area around the den is also equipped with hidden cameras to capture the photos of the cubs and their mother going in and out of the den.

While these cute snow leopard cubs look as cuddly and adorable as kittens, at their age, they already grow sharp retractable claws.

Hence, a pair of thick leather gloves are necessary for the handler to wear.

Even when the young leopard is in contact with humans, the snow leopard mother will not leave its cubs at will, unlike some species that will abandon as soon as they found human smell around their babies.

Hopefully, these cute cubs will grow to be powerful and healthy as their mother!

After years of therapy, the only thing that saved this autistic...