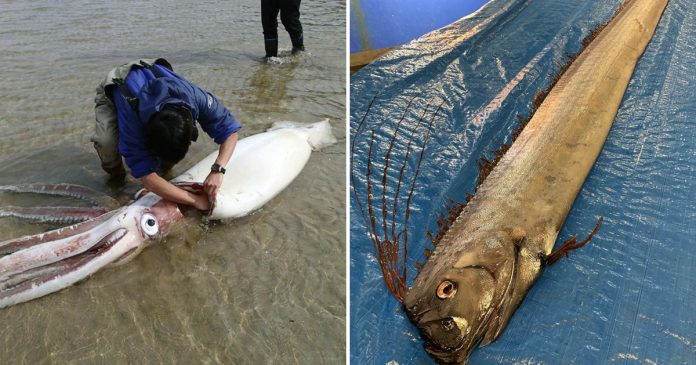 The sighting of beached two giant deep-sea fish and a giant squid may be astounding to many but not the locals in Japan as it may mean as a warning of an incoming earthquake.

The country is now on alert after several sightings of giant underwater creatures were found beached along its coasts.

In a recent discovery by local fishermen, two giant oarfish which are about 12 feet and 13 feet long respectively were found off the Japanese island of Okinawa.

The deep-sea fish stunned local fishermen when they suddenly emerged at the island’s southwest Toya port on January 28.

While the sighting of the deep-sea fish was considered rare, it had sparked fear among the locals that another earthquake or tsunami might likely to occur soon.

According to the Japanese legend, the fish which is known as “Ryugu no tsukai” in Japanese, or the “Messenger from the Sea God’s Palace,” often comes to the surface when a natural disaster like tsunami or underwater earthquake is nearing.

In a more recent incident, a giant squid was found dead in a river near Hamada city in Japan’s Shimane.

The 10-feet squid weighed about 135 kilograms and usually can be found at least 1,968 feet under the sea.

Due to the unusual sights of giant underwater creatures surfaced on its coast recently, many believed that it may reveal a warning.

However, scientists have disputed the claims. According to CNN, Uozu aquarium keeper Kazusa Saiba explained that such giant fish comes to the surface may be caused by global warming or subtle changes in Earth’s crust.

The changes in world climate could “cause the current to stir and push creatures at the bottom to the surface,” he told CNN.

“There is no scientific evidence at all for the theory that oarfish appear around big quakes. But we cannot 100per cent deny the possibility.”

Father-son duo saw a “Help” sign while on hunting trip, not...