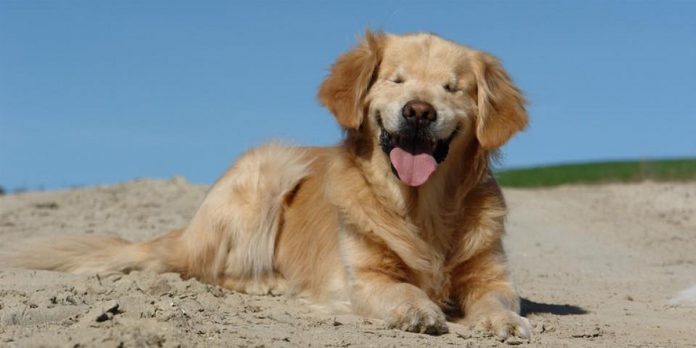 Besides suffering from dwarfism and few physical issues, a golden retriever called Smiley was born blind. He spent the first two years of his life in a puppy mill in a small town in Ontario.

In 2004, a former veterinarian technician Joanne George was sent to the puppy mill to euthanize about 20 dogs that would have required medical care. That was the moment she met Smiley, whose face was full of scars and his ears were split.

George knew right away that Smiley was having a hard time surviving with his disability.

As much as the disabled Smiley needed assistance, the condition of the puppy mill was not much of a help—it was terrible. So instead of euthanizing the dogs, George decided that she and another vet will find new homes for them.

All of the dogs managed to get adopted but not Smiley, most probably because he was blind.

George tried her very best to find Smiley a new family but later decided that probably she should stop looking.

“I just thought—he’s mine,” recalled George when she first thought about adopting Smiley.

George always knew that Smiley is a special dog.

Since that moment, Smiley has been visiting hospitals, schools, nursing homes, and any place where people needed a boost of love and affection. Smiley has then become a symbol of hope and joy despite his disability that keep on teaching people how to ‘live the moment’.

Smiley became so famous that he even had a meeting with Justin Trudeau, the Canadian Prime Minister.

Glad to meet Smiley, the Ontario therapy dog who teaches kids about bullying & acceptance. My thanks to St. John Ambulance for the visit. pic.twitter.com/1Xvl9QudM0

“People say they feel like a different person after meeting Smiley.”

Unfortunately, Smiley passed away when he was 15 years old after a brief battle with cancer, leaving behind his contagious positivity.

He may have left us, but he is definitely one of those who continues to bring happiness even when they’re gone.

Thank you for bringing happiness to all of us, Smiley.