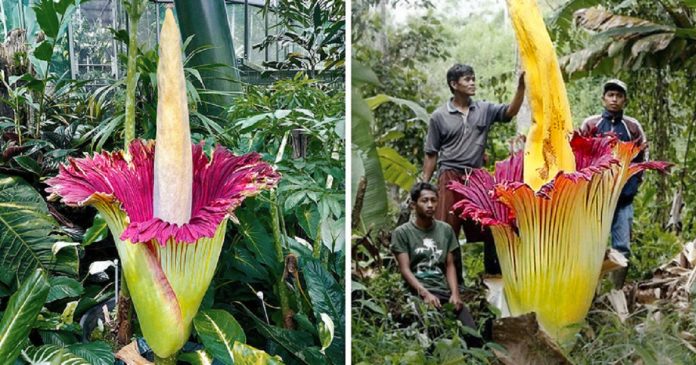 Plants and flowers are often portrayed as pretty and fragile but little did we know that they have exceptional qualities too. Some plants can reach incredible sizes, survives fires and even eat small animals!

These are 8 wondrous plants with amazing abilities:

Also known as Amorphophallus titanum, this flower is a real giant in the world of plants and its flower can rise to 9.8 feet above the ground. Can be found in the rainforests of Sumatra or big botanical gardens, the flower was said to have nauseating power thanks to its odor that smells like rotting corpse and carcass.

Native to the regions of North and South America, the trunk of this tree has huge conical spikes that are used for self-defense. Its flower gives pumpkin-shaped fruits that open into segments with a loud explosive sound, and throw the seeds up to 46 feet away from the tree.

This tree explodes fruit with seeds.

Can be found growing in Southeast Asian countries such as Indonesia and Malaysia, this parasite flower grows on the roots of its host. It doesn’t have roots or leaves of its own and grows on the woody stem of its host. Also known as the largest flower on the planet, it can reach up to 3.2 feet in diameter.

The flower uses its decaying meat smell to attract carrion flies who pollinate it.

If you’ve come across this cute yet thorny plant, you’ll know why it’s called sensitive plant for a reason. Responding to touch by closing its leaves and drooping, these unusual movements can be explained by a quick water release from the cells located on leaflets and leaf stalks. The leaves will normally open up again within a few minutes.

Native to South and Central America, you can find this plant widespread in other warm regions.

Native to Africa, this acacia tree not only produces a whistling sound from the bulbous of its thorns but also maintains a ‘friendship’ with ants. Ants use the hollow bulbs of the thorns as their homes and make tiny holes in those bulbs.

These holes make the whistling sound that is supposed to keep animals away from the plant’s branches and leaves.

This plant’s huge and incredibly strong circular leaves can grow to over 8.2 feet in diameter and allows them to float and hold up to 99 lbs in weight thanks to the air trapped in the ribs of the leaves. Grows in Bolivia, each plant produces 40 to 50 leaves that cover the water surface in one season, preventing any other plant from growing.

Grows in Madagascar, Southeast Asia, and Australia, these pitcher-shaped leaves serve as passive traps. The nectar secreted from the lid of the trap attracts insects and other prey that then slip from the upper part of the pitcher and fall into a pool of liquid at the bottom. The victims will drown as it is unable to escape and eventually get digested by the enzymes of this carnivorous plant.

Such a carnivorous plant.

Native to Australia and often planted in the United States, the leaves of these trees produce large amounts of highly combustible oils and generate a lot of energy when burning—making it able to survive fires. Eucalyptus even uses fires to spread its seeds as fire triggers a massive drop of seeds onto freshly fertilized soil.

The trees themselves resist the fire, and their burnt trunks regenerate instead of decomposing.

It’s amazing how plants can hold this much power!