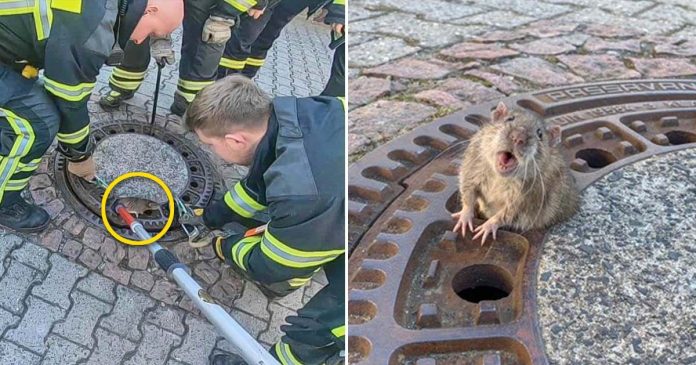 Most people would just run away when they see a rat, what more if it’s so big that it could actually get stuck in a manhole cover. This plump rodent should consider itself lucky to find people who are willing to go an extra mile just to get him out.

When one chubby rat got into this ‘sticky’ situation last Sunday, one concerned family decided that they should at least call the animal rescuers if they can’t help him.

So they called Germany’s Berufstierrettung Rhein Neckar informing that they spotted a rat trapped in a hole of a sewage drain cover.

Looking at the overwhelming situation, the rat did look like he had put on more weight than the usual rodent we see—struggling to squeeze himself out through the opening. While trying to go beyond the cover, the rodent, unfortunately, caught himself in the hole, struggling to free himself.

None of us speaks the rat language, but we’re pretty sure he’s crying for help.

When the volunteers arrive at the scene, they acknowledge that the rodent was very healthy—aside from being stuck.

“He was in a really good condition,” told the spokesperson for Berufstierrettung Rhein Neckar Andreas Steinbach to The Dodo.

However, it turned out that the rat was too tightly corked that the rescuers unable to get him through the sewage drain cover hole with the equipment they had on hand. Hence they decided that the rescue process might need some specialized backup.

“We weren’t able to rescue the rat alone. So we called the volunteer firefighters,” said Steinbach.

As the volunteer firefighters took the situation quite seriously too, they took a different approach thinking that the rat might get injured if they try to yank him out of the whole.

They lifted up the sewage drain cover and tried pulling the rat back out through the bottow—where he came from.

Thanks to all the effort made, the chubby rat was freed and get back into the sewer system.

After the successful rescue, the group of rescuers was greeted by two children from the family who had made the rescue call in the first place. They even came with a picture of the rat to express their appreciation to those who heeded their call.

Thank you for saving the chubby rat!

A rat might be a pest, but its life is worth saving too.

Heartbreaking video shows horse lays head on the coffin to say his last...