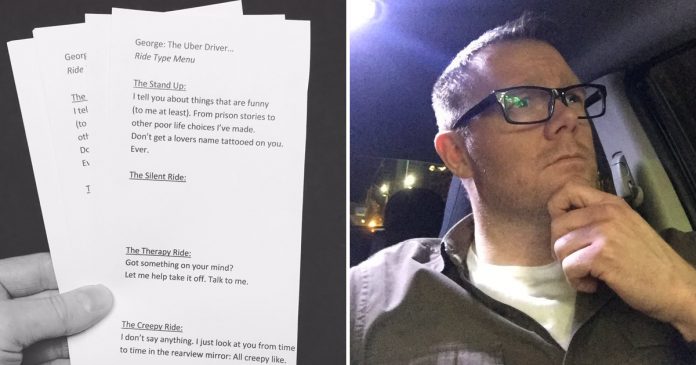 It’s good to be friendly but have you taken a taxi ride where you just wanted some peace but the driver keeps on talking to you non-stop? Well, this Uber driver definitely came up with the best solution for the sake of his passengers.

Aiming to provide the best service, this Uber driver called George let his passengers choose how they wanted the whole ride journey to be.

The outstanding service included five options—the Stand Up Ride, the Silent Ride, the Therapy Ride, the Creepy Ride, and the Rude Ride.

last night my uber gave me a menu on what kind of ride i wanted , pic.twitter.com/SMBBV4kVpu

Shared by a Twitter user called Luis who experienced the service himself, he said that he specifically chose the Therapy Ride as he was feeling down at that time and wanted some comfort from a sympathetic ear.

Luis shared the menu he chooses.

After Luis posted the 5 ride menus on the internet, he’s trying to get in touch with his former riding companion George to tell him how much love he was receiving thanks to his interesting riding menus. The news eventually found its way to George through a friend.

Selfie while driving the other night. Parked of course. #safetyfirst #drivesafe pic.twitter.com/48TXpDk3gj

The story even inspired George to create a Twitter account in order to see all the love he’s been getting. As a courteous person that he is, George didn’t forget to thank Luis for sharing about his riding menu. He even complimented Luis for being a great passenger.

Luis is just happy that George is now able to see all the love he’s been receiving.

George thanked Luis and shared that Luis was a great passenger himself.

Special thanks to @LuisLovesGoats for sharing this. He was a great passenger ??☝️ https://t.co/6bU6iQozLr

Now, with almost 7000 followers on his account, George shared a clearer picture of his menus for all the future passengers in the area. He also added that this whole internet experience has been very fun and humbling for him. He’s glad that the menu he made is making a lot of people laugh.

He uploaded a clearer picture of the menu, in case you wanted to book his ride.

As George’s Uber service went viral, some passengers shared their interesting experience while some others are torn on which riding menus they wanted to try.

The first thing you see in this image will reveal your...