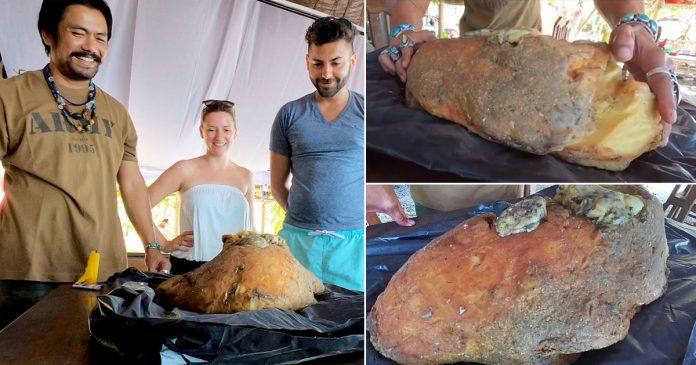 A 44-year-old barman made an extremely unusual discovery on a beach in Thailand—a huge lump of whale vomit which is worth a whopping $500,000!

Last June, Boonyos Tala-upara was strolling along a sandy beach in Koh Samui island, western Thailand, when he stumbled across a 22lbs wax-like lump.

He didn’t think much of it, but took it home anyway. He put it in his back yard and completely forgot about it.

It wasn’t until a friend visited him last month, that he found out it could be worth half a million dollars.

Boonyos’ friend told him the blob could actually be ambergris—or whale vomit—which is produced by sperm whales.

The substance is one of the strangest natural occurrences in the world and is often described as “floating gold” or the “treasure of the sea”.

“The lump is large and golden with a waxy texture like melting candles. But it’s soft when I poke it, not like a candle.

“I tried burning some of it with a lighter, it changed into oil and then it went hard again. I have never seen anything like this before.

“This could be like a lucky lottery ticket for me. I want to sell it and retire,” Boonyos said.

The strange substance is made when whales can’t digest parts such as beaks, so they move into the whale’s intestines and slowly merge together.

“Whale vomit was also known as ‘ambergris’ which is the decomposing food inside the whale stomach which has been inside for a long time. It has been used for fragrance in perfume, food, and cosmetics since the 13th century.

“Ambergris has been very highly valued. If the scientific result proved that it was the ambergris, Boonyos could get a lot of money selling it,” Assistant Professor Thon Thamrongnawasawat, Vice Chancellor of Faculty of Fisheries at Kasetsart University, said.

What a lucky man! We have our fingers crossed for him!