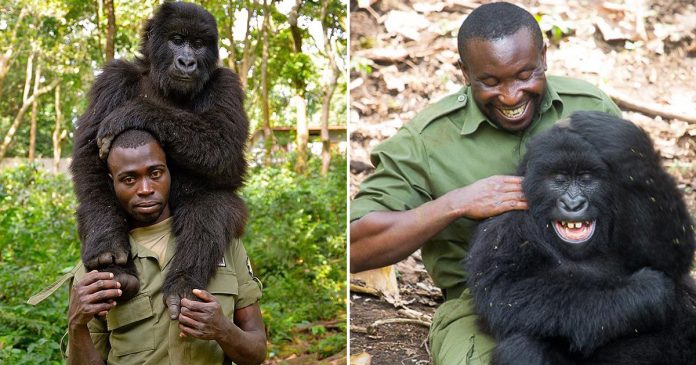 When we’re feeling down and having a bad, sometimes all we need to feel better is just a warm hug. Even when animal emotions are not as strong as our human emotions, one gorilla seems to know the right thing to do when he saw his caretaker looking all sad.

Matthieu is a caretaker at Senkwekwe rescue center in the Democratic Republic of the Congo. The center is located in an area that has been decimated by war, and the only facility in the world that cares for mountain gorilla orphans. The residents at the center were either victimized by animal traffickers or most likely witnessed their family being killed.

One of the rescued animals is an orphaned gorilla called Matabishi. Matabishi was raised by Matthieu for a long time and most probably regarded the caretaker as his father and friend. So when he saw Matthieu sitting alone looking down and dejected, Matabishi quickly approached his caretaker—as if asking what’s bothering him.

Looking at his sad caretaker, Matabishi approached him.

When Matthieu stood up, Matabishi suddenly held his caretaker’s thighs and hugged him. Matthieu was surprised by the embrace but touched by the way Matabishi trying to comfort him.

Warm photo of Matthieu and Matabishi embracing each other by Nelis Wolmarans.

According to Nelis Wolmarans the South African wildlife photographer, the mountain gorillas at the rescue center get along well with humans and have developed deep relationships with their caretaker.

They are comfortable around each other.

“They respect each other, trust each other, and have a strong relationship. You can see that this is a process of mutual comfort, and they will support each other when needed. I am fortunate enough to capture such a touching moment.”

Such a beautiful friendship!

Playful baby elephant taps on trainer with his trunk to get...