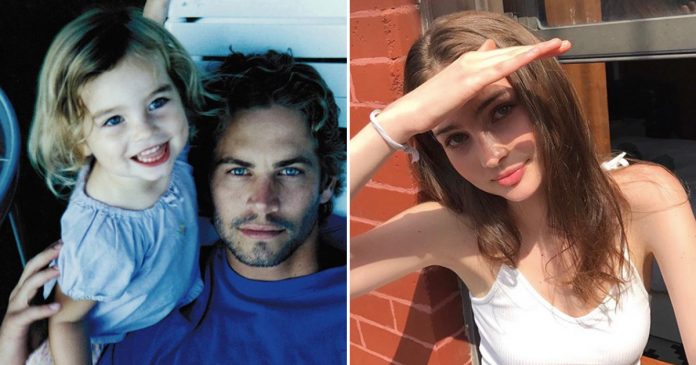 Meadow Walker lost her dad when she was just 13 years old, and now, she’s dedicating her life to following in Paul Walker’s footsteps to “do good”.

The 20-year-old model set up the Paul Walker Foundation in 2015, in memory of her dad, who sadly passed away in 2013 from injuries caused by a car crash.

The American actor was best known for playing Brien O’Conner in the hit action movies The Fast and Furious, which were first released back in 2001.

And when he suddenly died while filming Furious 7, everyone was heartbroken.

Now, Meadow is determined to carry on his legacy of always doing good when you can, through the Paul Walker Foundation.

“When you put good will out there it’s amazing what can be accomplished,” Paul Walker once said.

Her social media is full of sweet throwback photos with dad, captioned with the most touching tributes.

Meadow, who is an only child, moved in with her dad in California just two years before he passed away, and it’s obvious that they shared a special bond.

Paul himself was a member Reach Out Worldwide, a humanitarian aid team.

He was actually on his way to the charity’s fundraiser when he was involved in the accident which killed him.

So now, Meadow just wants to share her dad’s passion with the world. “I want to share that part of him with others,” she wrote.

Meadow is definitely doing her dad proud with her huge heart. His legacy will live on forever thanks to her!

Shy girl blows everyone away when she sings a powerful and...