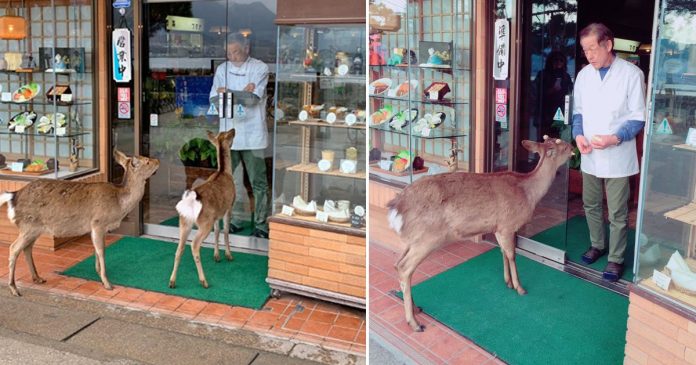 Famous for its interesting culture, Japan is one of the favorite tourist destinations around the world. Besides the breathtakingly beautiful cherry blossoms, Japan is also well-known for its free-roaming deer parks.

It’s nice and all to have deers walking freely around you but a Twitter user recently shared that this group of deer was quite mischievous. In the captured photo, a group of deer was seen having quite a scene with a man in front of a casual dining restaurant called Fukuya.

Believed to be the owner of the place, the man was not moving from the glass door, but so are the deers! Looking at how ‘intense’ the deers’ gazes are, many people nicknamed them as the yakuza deers which means gangster after translation.

“Let’s agree that you can come out when I can get in.”

Apparently, that was not the only time the deer was trying to get on the nerves of the owner as some visitors have evidence of the four-legged trying to get into the restaurant.

“I’m just curious what kind of food they have inside.”

As some people might be wondering why the deer really wanted to enter the restaurant, it turned out that the owner was quite fond of them and occasionally fed and pet the deer.

The deer looked calm when the restaurant owner pets him.

Not sure if the owner is petting the deer or trying to stop him in this one.

They’re probably trying to set some rules between them.

People also shared a picture of the owner with the deer that was taken five years ago. Looking at how the owner’s hair is all healthy and black, some people are joking that he must be aging fast now thanks to the mischievous deer.

The owner and the deer five years ago.

Hopefully, they got to resolve all things between them.

Check out the video of the deer attempting to get in below: