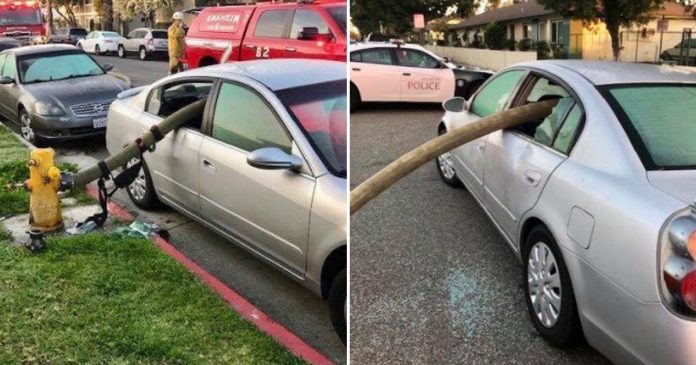 Everyone knows there are certain places we cannot park our vehicles at. Parking your car in front of a fire hydrant is a big no-no because a blocked hydrant could prove fatal in emergency situations as the obstruction could delay the firefighter’s efforts.

With this being said, many people do it anyway because they think the odds of there being a fire in the area is next to none.

Here is a reminder to the public that emergency situations can happen at any time from the Anaheim Fire and Rescue Department, Southern California who had resorted to desperate measures upon seeing a car obstructing a fire hydrant they needed to use.

On the morning of February 26, the Anaheim Fire and Rescue team were called to respond to a kitchen fire.

When they rushed to the scene, they found a silver sedan parked right in front of the closest fire hydrant so they had no choice but to quickly deal with the obstruction. 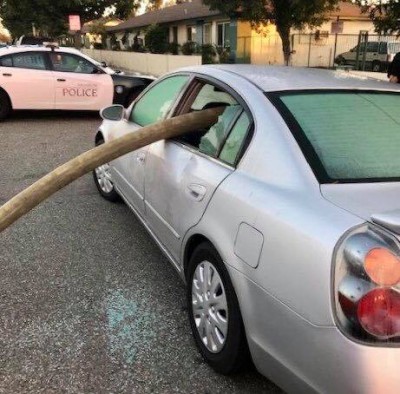 The team had no choice but to break the vehicle’s two rear windows and feed the hose through the car.

Later they posted the scene on Twitter with the captions, “Ever wonder what happens when a car is parked in front of a fire hydrant and a fire breaks out? Is a closer parking spot worth the broken windows and the citation and towing fees?” 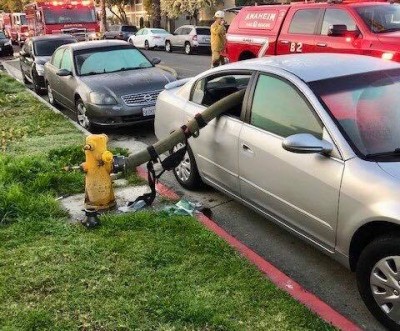 Firefighters have little choice as Sgt. Daron Wyatt says “Running the hose under the car or snaking it around doesn’t work ’cause the angle can pinch off the flow. If that worked, we wouldn’t need to have fire lanes in front of hydrants. Running the hose over (the car) would probably cause more damage, so breaking the windows actually is better for the owner.”

The department got some unexpected backlash from posting the photo though but Sgt. Wyatt responded by saying “Some people thought we posted the picture to humiliate somebody, we did not. We wanted to illustrate and educate.”

Ever wonder what happens when a car is parked in front of a fire hydrant and a fire breaks out? Is a closer parking spot worth the broken windows and the citation and towing fees to @AnaheimPD? @City_of_Anaheim residents please do not park in fire lanes pic.twitter.com/Q96E4gfTOR

Couple who named their child “Google” receives surprise gifts from the...