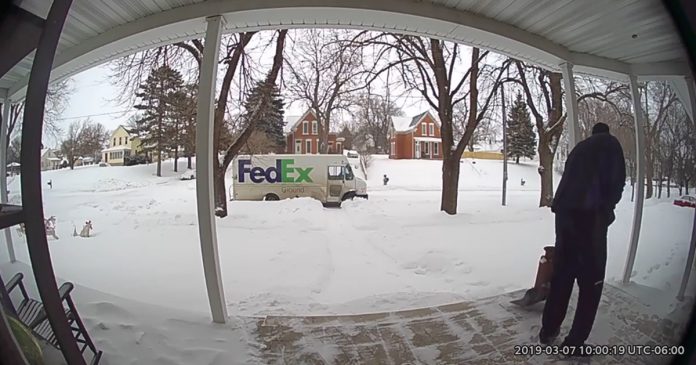 Leigh Anne is a single mother lives in a small town in Nebraska with her children after she lost her 42-year-old husband to cancer. Since then, Anne has been keeping everything in place by herself—looked after the children, kept a beautiful home, tended to additional properties that the couple used to manage together and lot more.

Those kind of things are manageable alone but Anne requires a helping hand when it comes to repairing jobs, heavy-duty house and garden maintenance. As Nebraska is no stranger to heavy snowstorms, Anne had to perform some maintenance on her car after a particularly impressive snowfall.

Anne lost her husband to cancer.

Her tires need pumping, but she requires some help to perform it under piles of freshly fallen snow. When she saw a familiar face, the FedEx driver Brian Scholl whose regularly passed through her neighborhood, Anne was not shy to ask for help. Happy to oblige, Brian parked his vehicle near Anne’s house and helped her fix her car.

They chatted for quite a while and Brian learned about Anne’s loss. He felt the extent of her sorrow and wanted to help beyond merely pumping the single mother’s car tires—but he didn’t want to be obvious.

He knew he had to do something.

Decided to extend his gesture of kindness in the quietest and gentlest way, Brian returned later without informing Anne and shoveled the humungous pile of snow from her laden porch. He knew how tough it would be for the busy mom to complete the task herself and decided to do it.

Little did he know, his act of kindness was caught on Anne’s doorbell camera. Overwhelmed by the surprise and gratitude after she checked the recorded video, Anne uploaded the touching video on her Facebook.

“Doorbell cameras don’t only catch people stealing packages. Our FedEx guy stopped and out of the kindness of his heart, scooped my sidewalks. I truly feel like we cross paths with people for reasons. Thank you Brian Scholl for just being you, and being one of the people who truly ‘get’ our situation!” wrote Anne.

Managed to make Anne feel thoroughly supported and thoroughly understood by his gesture, a lot of people were praising Brian for his act of kindness. He was also hailed as the best FedEx driver by the online community after he showed such integrity, dedication and kindness to his customers.

Watch Brian’s act of kindness in this video:

Doorbell cameras don’t only catch people stealing packages. Our FedEx guy stopped and out of the kindness of his heart, scooped my sidewalks. I truly feel like we cross paths with people for reasons. Thank you Brian Scholl for just being you, and being one of the people who truly ‘get’ our situation! #kindessmattersBrian Scholl