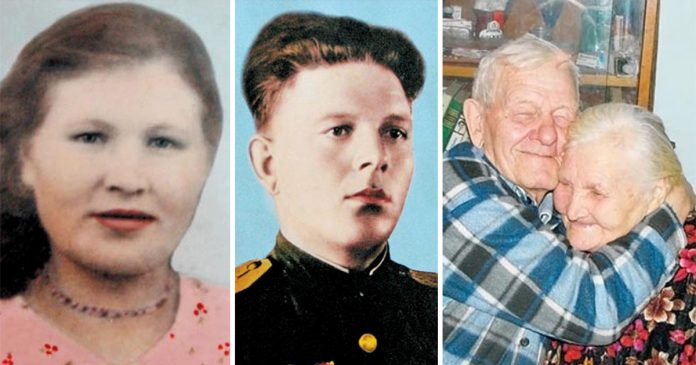 Anna and Boris Kozlov met when he was the secretary of the Young Communists and had to make a speech in the village. When she was standing in a circle of friends, Boris had his eyes only for Anna.

Anna’s father had been purged by Stalin before the war for refusing to work on a collective farm, but Boris didn’t care. To Boris, Anna was too beautiful for words. Naturally, their romance blossomed. In 1946, the couple got married in Russia.

It was a hasty wedding as there was no time for anything else and they couldn’t afford anything grand in those hard years after the war—but it was still beautiful. Every time Boris came home, Anna was always there waiting for him. But after just three nights as husband and wife, the newlyweds were parted when Boris had to return to his army unit.

“We kissed goodbye, but I never expected we wouldn’t see each other for more than half a century,” said Anna.

Young Boris left as he had to return to his army unit.

Whilst Boris was away, Anna and her family were forced to leave their home as they had been classed as the enemies of the state. Forced into internal exile in Siberia, Anna was no longer there waiting in front of the house when Boris returned and nobody knew where she had gone.

“I threatened to commit suicide rather than go because I couldn’t live without him. But in the end, I was forced to go,” recalled Anna.

“It was the most miserable time of my life.”

“She was always smiling for me when I came home, but this time there was no sign of her. Nobody knew where they are, or what happened to Anna. That’s how we lost any track of each other,” recalled Boris on his painful memories.

After being separated, both Anna and Boris were pressured by their families to remarry. Anna’s mother went as far as telling Anna that Boris has forgotten about her, that’s why there were no more letters came.

Anna and Boris were forced to remarry after the painful separation.

“I didn’t believe it and I longed for him so much. But one day I got back home from work at a timber plant and my mother had burned all Boris’ earlier letters, poems, and pictures—including our wedding pictures,” told Anna.

Both Anna and Boris finally gave-in after quite some time and remarried. But they never forget each other. Boris later became a writer—even wrote a book dedicated to the woman he got married as a young soldier, Anna. Anna remarried and gave birth to a son. But she later divorced and not long after—lost her son too.

Boris also divorced after remarried and even went to prison at some points.

After more than 60 years of separation, Anna and Boris found each other by chance in 2007. Boris had returned home to visit his parents’ graves and as he stepped out of the car, he saw Anna—standing outside of the house that they had spent their three nights as a married couple.

“I thought my eyes were playing games with me, I saw this familiar looking man approaching me, his eyes gazing at me. My heart jumped. I knew it was him. I was crying with joy!” told Anna.

“I ran up to her and said: ‘My darling, I’ve been waiting for you for so long. My wife, my life’,” said Boris.

“I felt the same when we met again after so many years. I couldn’t take my eyes off her. Yes I had loved other women when we were separated. But she was the true love of my life,” said Boris.

But Boris talked her round and they got married again.

Now both at the age of 82 years old, Anna and Boris claimed that they have never argued after reuniting.

“Since we found each other again, I swear we haven’t had a single quarrel. We’ve been parted for so long and who knows how much is left for us. So we just don’t want to lose time on arguing.”

They only want to spend the best time together as long as they still have time.

We’re glad that both of them finally had their happy endings.

8yo village boy travels more than 6 miles to school everyday...

Farmers remain silent at auction so that young man can buy...