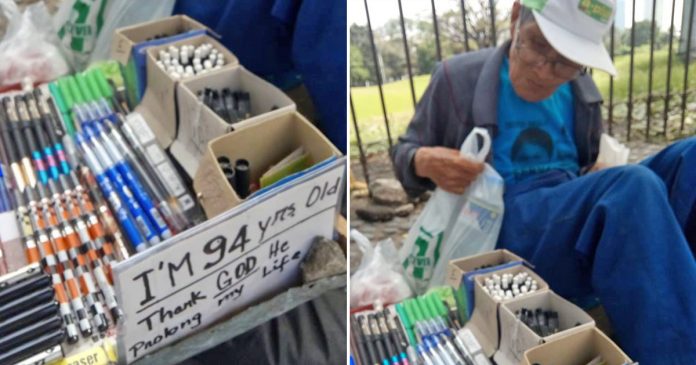 Working to earn a living is not an easy thing to do even at a young age. But this elderly proves us wrong when he was spotted sitting by the street and sells pens of various kinds.

The scene was shared by a Facebook user called Dudot Argente when he saw the 94-year-old near an Intramuros entrance coming from the side of the Manila City Hall in the Philippines. Besides pens, the old man was also selling assorted writing instruments.

Looking at how diligently the old man is working and earnestly living, Argente in his Facebook posting urged people to pay a visit to the old man’s small vendor and help him by buying the instruments he’s selling.

According to Argente, the pens are affordable and they are available in many beautiful shapes and designs too!

After reading the post made by Argente, another user called Jai Pastrana remarked in the comments section that the old man was not using his age to beg for money or to make someone buy his goods.

“He is not using his age to beg for money or for someone to buy his goods but instead just to let anyone know that he is thanking God for prolonging his life,” said Pastrana.

Many Filipinos who saw Argente’s post voluntarily tagged their respective friends and invited them to support the old man. Some of them also include particular hashtags to call the attention of television magazine shows with hopes to have the old man featured.

A man’s diligence that is worth all the praise!

This homeless drug addict never cares about his life until he...