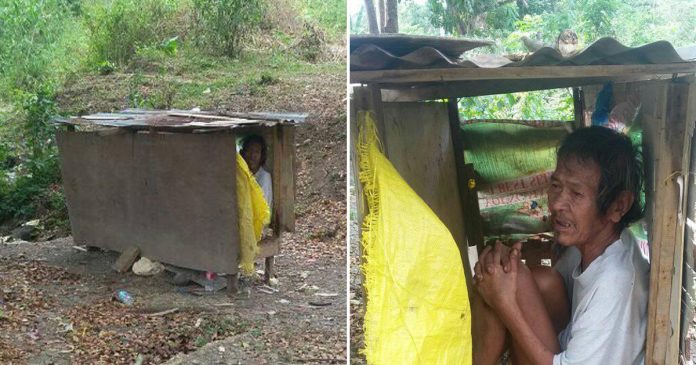 Statistics from the World Bank back in 2012 shows that over a quarter of the population in the Philippines lives below the national poverty line and although efforts have been made throughout the years, present-day poverty rates among its citizens are still extremely high.

With this being said, it is still heart-breaking to see this frail, elderly man living this way. A Facebook user known as Xylenejoy Siarot had shared photos of this man from Barangay Tominobo, Iligan city.

What struck her was the fact that this feeble man was living in a tattered box. The box is just large enough for the man to cramp in and use as a shelter. It has a metal sheet over the roof to keep the rain from getting inside.

The box is roughly a meter in width and not more than 2 meters in length. The elderly man cannot even stretch his limbs comfortably in the tattered shelter he calls his home.

The comments and reactions Siarot got was a mix of people who wanted to know more so they can help the poor man and also people who condemned her for not taking this man to the nearest shelter when she found him. The UN Habitat estimated that approximately 44% of the urban population in the Philippines live in slums, therefore most of the efforts in building shelters to aid the homeless are concentrated in the country’s capital, Manila.

Many users also tagged Kapuso Mo, Jessica Soho to get the civic-oriented news program’s attention in hopes that they can help the elderly man.