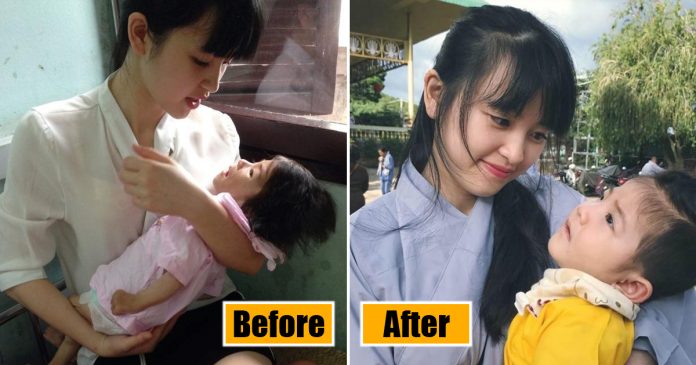 Thao Thi Yen Nhi is a young girl with cerebral palsy, severe malnutrition and only weighing only 3.5 kg. Without parental care, Nhi was stick-skinny and unhealthy. But thanks to this beautiful kind lady Pham Thi Thanh Tam who adopted her, Nhi is now healthy again.

Tam graduated from Lao Cai Community College majoring in Accounting and helped her family manages hotels after her studies. The 24-year-old Tam first saw Nhi at a charity event as she regularly participated in charitable activities. There, she decided to adopt the sick child almost immediately.

The girl before she was adopted by Tam.

Tam cares for Nhi like her own daughter and gave her all that she needs. Even when she didn’t have experience as a mother, Tam did a very good job raising Nhi. The girl whose extremely thin and sickly has turned into a healthy chubby girl under her care.

The sick girl is getting healthier by day.

At first, Tam’s family were surprised and did not support her decision to adopt Nhi. But they’ve become more accepting with time.

When Tam adopted Nhi, a lot of people are worried if she will abandon Nhi once she got married, but that’s not the case. Tam’s future husband is aware that she has an adopted daughter and is determined to take care of the child. Tam also makes sure to always bring Nhi to the hospital for treatment.

But she never abandons Nhi.

Even before adopting Nhi, Tam took care of Nhi’s every meal and sleep for nearly 10 days in the hospital. After Nhi’s condition was getting better, she adopted the poor little girl and brought her back with her.

Tam’s husband is supportive of her and even helps to take care of Nhi.

After getting married, Tam still brings Nhi along with her husband and her mother. Tam also receiving support from her husband while taking care of Nhi.

Nhi turns into a cute and bubbly little girl, thanks to Tam’s care and love.

The transformation was beyond words!

The skinny child has turned into a chubby and healthy child!

The Sacrifices During Pregnancy! This Woman Shares Her Experiences Before and...