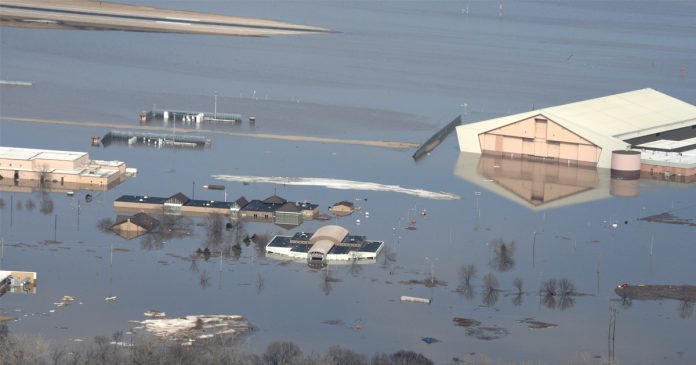 The Nebraska flooding is so severe, that the governor has decided to declare a state of emergency.

The flooding, which has destroyed businesses and homes, and caused hundreds of millions of dollars in damage, has been called the worst and most widespread destruction in the history of the midwestern U.S. state!

Now it’s looking to get even worse, so Nebraska Governor Pete Ricketts has declared a state of emergency for Nebraska, and also in Iowa, Wisconsin and South Dakota.

It is “the most widespread destruction we have ever seen in our state’s history,” Pete said, according to CBS News.

As of March 19, 74 cities, 65 counties, and four tribal areas were under a state of emergency, according to USA Today. Ranches and farms are even predicted to lose up to a whopping $1 billion from the damage!

This picture is high above the Spencer, Nebraska dam today which was compromised on Wednesday. Prayers going out to the towns that had to evacuate downstream of the Niobrara River and to all those affected by the #nebraskaflood. #Flood2019#nebraskaflooding #NEflood pic.twitter.com/LCcvHvupQl

200 miles of highway are now so damaged, they’re unusable and 14 bridges are irreparable too, Pete said.

“Obviously we’ve got a lot of recovery left ahead of us. It’s going to be a long road for us to rebuild our infrastructure and get people back in their homes.

My dad @juehling5 and sister @UehlingValerie standing in what used to be County Road H between Uehling and Oakland, Nebraska. This is about a mile away from where my parents live. #NebraskaFlood #Flood19 pic.twitter.com/tsTqCgHPxw

He said that $400 million has been lost so far in terms of livestock, and another $440 loss from grain!

“We’re encouraging our farmers and ranchers to contact their local FSA office, Farm Service Agency, to notify them that they’ve got these loses and to keep track of this, so they can take advantage of things like the livestock indemnity program,” he said.

And when Vice President Mike Pence visited Nebraska to inspect the damage caused by the devastating flood, he made his way to a temporary shelter to speak with volunteers.

“We’re going to make sure that federal resources are there for you,” he said.

The flood might not stop any time soon! Iowa’s governor Kim Reynolds said that the flooding might last all spring, and even more rain could create additional flood hazards.

I hope everyone who can evacuate has done so.. #Flood2019 #NebraskaFlood pic.twitter.com/0Xktd4xL1t

“We’re in for the long haul. We’re just getting started. It looked like an ocean,” Kim told USA Today.

This guy isn’t letting the flood dampen his spirits, though.

Professor Stephen Hawking has a final message for mankind before he...