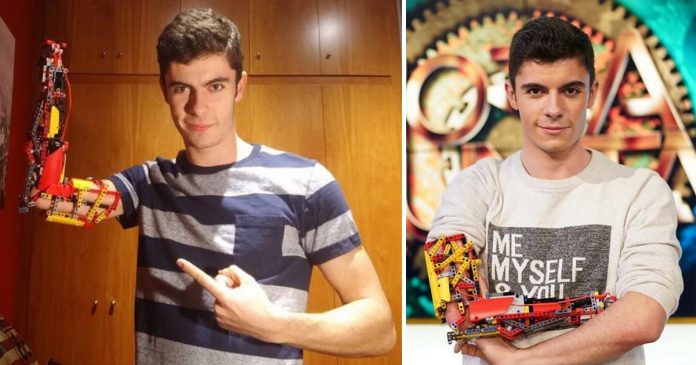 Born without a right forearm because of a rare genetic condition, David Aguilar has always been very nervous in front of other kids. But being different didn’t stop him from believing in his dreams.

Aguilar loves Lego during his childhood and has been doing amazing things with it. While other kids were snapping bricks, the 9-year-old Aguilar engineered his first basic arm at the such a young age. Used to not having a right forearm, Aguilar used Lego pieces to build prosthetic arm.

The young Aguilar with his early version of his lego arm.

At the age of 19, Aguilar from Andorra is now a bioengineering student at Universitat Internacional de Catalunya in Spain—and still using Legos to make a difference.

He is now on his fourth robotic Lego model arm, which can bend at the elbow joint with an electric motor and a grabber.

He looks forward to creating affordable prostheses for people in need and understands first hand the challenges of being different and wanting to feel normal. After showing off his robotic arms under the name Hand Solo, Aguilar has become a viral sensation with more than 10 million views on a YouTube video.

Aguilar shows off his Lego arm.

“I would try to give them a prosthetic, even if it’s for free, to make them feel like a normal person, because what is normal, right?” said Aguilar.

Growing up conscious of his condition, Aguilar admitted that he’s not as focused now on what others think of him as what he can do for others. He rarely uses his robotic arm now because he’s self-sufficient without it.

We’re looking forward to more exciting things from this adventurous scientist in the future.

A taxi driver told his passenger that he was too sleepy...