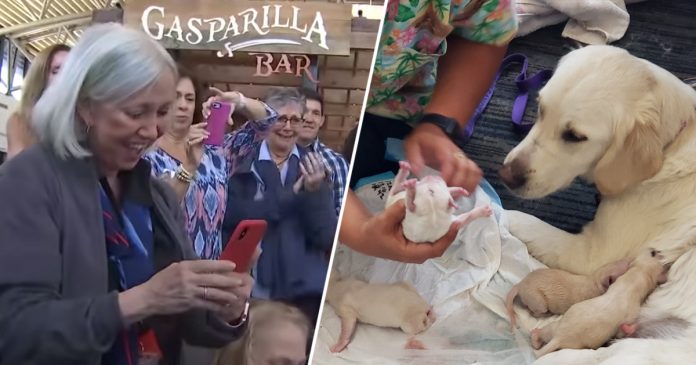 Service dogs are dogs that have been specifically trained to help people who have disabilities. One particular service dog, a Labrador named Eleanor “Ellie” Rigby was the center of attention at the Tampa International Airport recently because of an unforeseen surprise.

Ellie and her owners were waiting to board a two-and-a-half hour flight to Philadelphia when she stopped to lie down on the floor. She began to whimper and her owner Diane Van Atter, got extremely worried thinking that her dog may be ill.

It turned out that Ellie was not ill at all and was in fact, going into labor!

Her whimpers could be heard throughout the terminal and the other passengers were both excited and in awe because for many, this was a once in a lifetime experience.

Ellie’s mate Golden Nugget was by her side and watched as she gave birth to eight pups in total, seven males and one female.

The family naturally missed their flight but it hardly concerned them because Ellie was the priority.

The paramedics, Natalie Brown and Larry Glanton, who rushed to Ellie’s aid were rewarded by getting the chance to name two of the pups after themselves.

#Ellie is the proud mother of 6 boys so far…The delivery crew including @TPAPolice @flytpa awaits number 7. Will it be a girl? #AirportPuppies pic.twitter.com/Wla9iHjGEJ

Despite the miracle that happened, some individuals had some questions for Ellie’s owner. These include why the family decided to board a flight with Ellie when she was so close to her due date as well as why their service dogs were not neutered or spayed according to the standards set by the International Guide dog Association and Assistance Dogs International.

Van Atter replied that personal family issues had prevented her from leaving Florida sooner and she thinks it isn’t wrong for service dogs to be pregnant and to deny them that right is unjust.

According to Van Atter’s stepmom who were together with them, they knew that Ellie was pregnant, but believed the excitement of being in the airport surrounded by new people may have triggered the early birth.

People were also suspicious about the fact that she got Ellie and Nugget from a breeder rather than from a specialized service dog breeding program but this is not unusual since service dogs can come from breeders then trained by a private trainer.

Despite the controversy surrounding the event, everyone can agree that this was a truly wonderful moment!