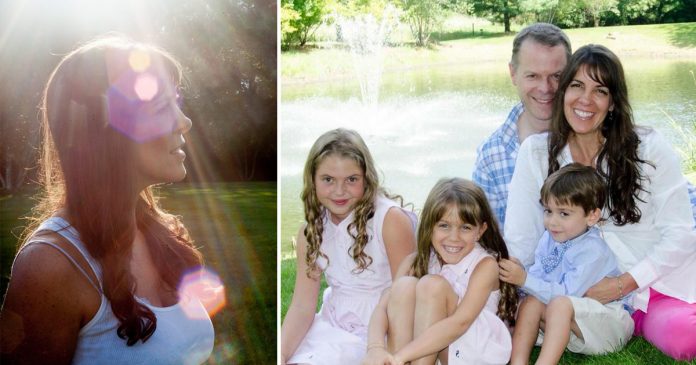 Coming back from the dead sounds like a made-up story but this woman Stephanie Arnold did experience it for 37 seconds! The woman forwarned her doctors on how to save her weeks before she dies—thanks to a supernormal premonition.

Stephanie is a mother of three and married to Jonathan Arnold. Back in 2012 when the family was looking forward to their second child, Stephanie’s joyful anticipation at 20 weeks pregnancy became shadowed when she saw in a vivid dream that she had died after giving birth.

The mother of three was no longer excited but worried.

Happy Father’s Day to the greatest #dad we know! #happyfathersday everyone today! For dad’s past, present and future…..

“Whenever someone asked how my pregnancy was going, I would blurt out that I’m going to die. I wrote goodbye letters, I sent them out, and I waited for D-Day—my delivery and the death day to arrive,” told Stephanie to MindBodyGreen.

Believed that her vision was a sign from heaven to help her prepare for it, she confided her premonitions with the medical staff at 32 weeks of pregnancy. So she was suggested to consult the anesthesiologist.

“Not only am I going to die, but I’m also going to need a hysterectomy.”

I've been told orbs of light in your photo mean many things. What do you think/know? (Or it could just be the lens and the light).http://paranormal.lovetoknow.com/Spirit_Orb_Size_and_Color

However, the anesthesiologist—just like her husband, thought that she was suffering from anxiety. The anesthesiologist still flagged Stephanie’s file after a phone call and incorporated extra blood and a crash cart in the operating room, just in case.

On the day Stephanie gave birth by C-section, she suddenly flatlined.

We are acutely aware of how close it was to not being here. AFE Awareness Day is March 27th. Thank you to my doctors and…

She suffered an allergic reaction to the amniotic fluid entering the bloodstream, causing a condition called amniotic embolism. The condition is rare, with an occurrence of 1 in 40,000 and the outcomes are fatal. In addition to that, she suffered cardiac arrest and kidney failure too.

Stephanie underwent an emergency hysterectomy and was given blood transfusions but nothing helps—she died. In the 37 seconds moments of her death, she said that the spirit of a boy approached her—it was the late brother of her best friend. He died at the age of 7.

“He said to me, ‘tell my sister that I miss the way she twirled my hair’. And I’m like, ‘okay’,” Stephanie relayed to Megyn Kelly.

After being resuscitated, Stephanie called her best friend and passed her the message from her late brother. Her friend was shocked and broke into tears as she asked how did Stephanie know about this thing that she used to do to her brother to put him to sleep.

Stephanie told that she accurately identify all the medical staff in the same room as her dead body and able to hear, see and recall everything that happened in the room during her death.

Dr. Nicole Higgins, who worked on Stephanie that day said that she described everything accurately.

“She also had described there was a malfunction of our defibrillator machine, which necessitated that we had to take that one out and bring a new one in. She described that accurately.”

After coming back from the dead, Stephanie has gone to become a motivational speaker and claims that she will continue to have premonitions about things. She also wrote the book entitled 37 Seconds and describes her out-of-body experience in details there.

Stephanie with her book, 37 Seconds.

What a surreal experience!

Skinny to the bone, little girl with cerebral palsy had amazing...