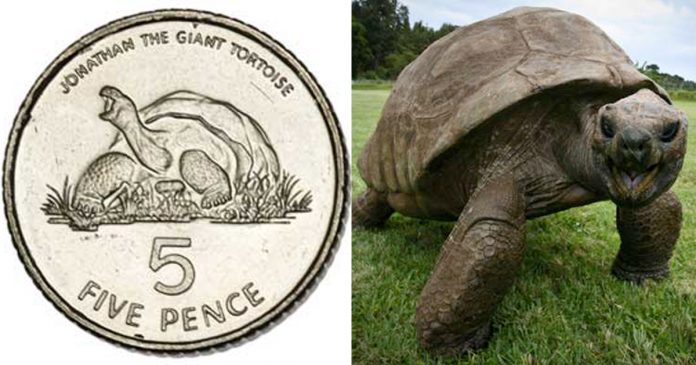 St. Helena is a volcanic island situated remotely in the South Atlantic Ocean, where the Plantation House is home to the 187-year-old Jonathan—the oldest land animal known living on Earth. Now after 184 years, the giant tortoise gets his first bath in recorded history.

Believed to be born circa 1832—five years prior to the coronation of Queen Victoria and was originally from Seychelles in the Indian Ocean, Jonathan the tortoise was so famous that he was even listed as one of the seven wonders of St. Helena.

Jonathan also has his portrait to appear on the island’s five-pence coin.

Jonathan was 50 years old in 1882 when he was first brought to St. Helena Island, an overseas British territory. He was given as a gift to a governor called William Grey-Wilson at that time.

Having lived longer than any human, the majestic tortoise has witnessed a lot of historic events including the Russian Revolution, two World Wars and 39 US presidents.

He was also alive when the first photograph to include a human form was taken in Paris by Louis Daguerre in 1838, the incandescent light bulb was invented by Thomas Edison in 1878, and the first powered flight was flown by the Wright brothers in 1903.

Photo of Jonathan taken back in 1886.

Now a grand old gentleman who has seen generations of people coming and go, Jonathan was said to be quite adventurous when he was young. He was reportedly crawled into the governor’s lawn to disrupt croquet matches and went under tables at tea parties—damaging the chinaware. Now he loves spending his golden years roaming around the lush garden, basking under the sun and enjoys the company of people.

“Being the oldest land animal in the world, he has almost royal status here. He is dignified and interacts in a friendly way as long as people move slowly around him.

We are all very fond of him,” said Teeny Lucy, the chairperson for the local SPCA and one of Jonathan’s caretakers.

As the oldest resident of St. Helena, Jonathan did have age-related problems. He’s likely to be fully blind due to cataracts and has lost all sense of smell. He also had some medical issues that concerned with his diet a few years ago. Despite all that, Jonathan has excellent hearing and still going strong.

Jonathan is on a strict diet of fruits and vegetables. Among his food are carrots, lettuce, cucumbers, pears, and apples.

Now 187 years old, Jonathan is just one year away from beating the title of Guinness World Records’ oldest chelonian—currently held by Tu’i Malila, a pet of the Tonga royal family between 1777 and 1965 that died at the age of 188 in 1965.

As to the secret of Jonathan’s longevity, vet Catherine Man shares that reptiles have a slow metabolism in general—they breathe slowly, eat slowly, and live a long time.

“But perhaps his stress-free lifestyle here, and the clean air help explain his longevity,” added Catherine.

We wish you many more years ahead, Jonathan!

Watch how Jonathan takes his bath when he was 184 years old:

Credit: The Epoch Times | The Dodo

15yo boy and his cow did not win competition but they...