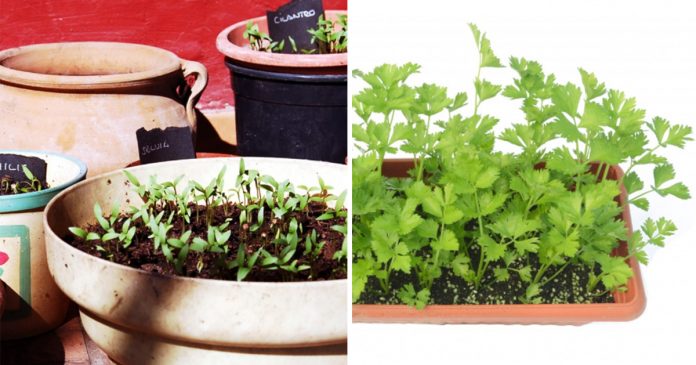 Cilantro is used to enhance the flavor of many South-East Asian and Mexican cuisines. The highly aromatic herb cilantro can also serve as dressing to improve meal appearance. Most people would buy this herb rather than growing it themselves because they think that it’s one of the most difficult herbs to grow.

Well, they’re wrong because it’s not that hard.

You can easily grow cilantro by following these few simple steps:

Similar to dill, cilantro needs a pot that is deep and wide—not the too shallow pots like most people believe. To grow cilantro in a pot, the perfect pot you need would be the one that’s at least 18 inches wide at 10-12 inches deep.

A deep pot is perfect for growing cilantro.

Sow the seeds at 1/4 inches deep and keep the soil moist until the seedlings germinate. If you have grown them in the seed tray, plant them to their final location once the plants have formed 2-3 leaves. On a side note, gently crush the seed husk before sowing if you’re planting grocery store seeds to improve the germination rate.

It’s better to sow the coriander seeds directly in a pot because cilantro has a long taproot and doesn’t transplant well.

Requirements for growing cilantro in a pot

Cilantro needs a frost-free period to grow but doesn’t like extreme heat. It can be successively grown from spring to fall. In warm temperate and much hotter regions, you can grow cilantro in winters too.

You can start to harvest cilantro leaves when they have reached 3-6 inches length—about 3 to 4 weeks after sowing seeds. If you want to harvest the entire plant, wait for at least 45 to 70 days.

Cut the entire plant at soil level or 2 inches above the crown.

It’s actually very easy to grow cilantro. Shall we go get some pots now?