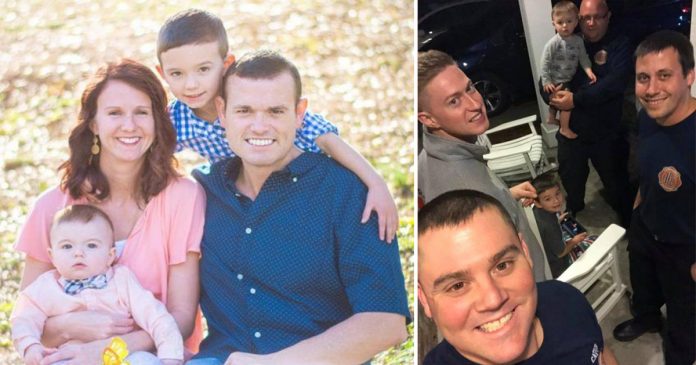 Being constantly called upon for duty to save lives is already a hard thing to do, but the firefighters in Engine 3 in Harrisburg, North Carolina recently go above and beyond to help a family in need.

It all started when Steven Taylor suffered a medical emergency at home one night and his wife Tonya gushed to call 911. Luckily the Harrisburg Fire Department and EMTs quickly arrived on the scene but later realized one important issue.

Taylor and Tonya have two sons at home.

The firefighters in Engine 3 realized that both Taylor and his wife Tonya needed to go to the hospital, but there’s nobody else at home to watch their children. Realizing how serious the situation was, the firefighters stepped up to babysit Taylor’s two young sons without a second thought.

The firefighters gladly babysit the children.

So, the firefighters watched the adorable 7-year-old and 1-year-old boys for 45 minutes while waiting for their grandparents to make their way home so that Taylor and Tonya can go to the hospital.

“Sometimes we do what needs to be done. So was the case at a medical call last night. The parents of these two guys needed to get to the hospital by ambulance and it was going to be about 30 minutes till Grandpa could make it from another county. The crew of Engine-3 to the rescue! The guys enjoyed the next bit being awesome kid sitters till family arrived, we love our community,” shared the fire department on social media.

The boys look comfortable in the hands of the firefighter.

Even when none of the men in Engine 3 actually have children but they really had no trouble playing with the two boys.

“We played hot wheels with the 7-year-old and Cooter took him outside and around the block. Walked the little boy pushed him in his little car and kept him occupied,” recalled firefighter Lee Dewitt.

He knew what to do.

“We all knew what needed to be done. So, we needed to get the family the medical help they needed right away and it just became natural that we were all ready to just take care of the kids until grandma and grandpa were able to get there and take over,” added firefighter Chris Carter.

Look after the children? No problem!

Incredibly grateful to the helpful firefighters for what they did, Tonya and Taylor took it to Facebook.

“I wanted to thank the Harrisburg Fire Department! Words can’t express how grateful we are you were there for us. We appreciate all of you for helping us.”

Having a daughter improves the lives of men in many ways,...