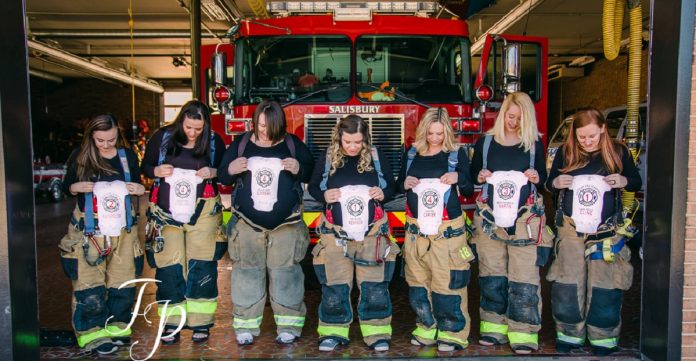 The Salisbury Fire Department’s firefighters in North Carolina definitely have good relationships with each other that seven wives of the department’s 85 firefighters are currently pregnant at the same time.

What’s more interesting, six of the seven current dads-to-be serve on the same shift—spending their 24 hours on duty together and later take the next 48 hours off.

Six of the seven firefighters’ wives are also first-time mothers.

The former Salisbury firefighter Brianna Mitschele who’s now a professional photographer blogged and Instagrammed about the baby boom last weekend and it’s been receiving so much love ever since.

People are charmed by the story of how such a baby surge happened in such a small town.

“When I found out that a few of my friends were expecting we then found out that even more were also expecting, each Facebook post popping up one after another, so I had to snatch up this opportunity to capture such a special time in this departments history!” told Mitschele.

“I asked all of the lovely ladies if this is something they would be interested in and they were all for it, so we planned a date and made some magic happen!”

So Mitschele planned a photo shoot for two fire department wives who are due this spring over the holidays, but three more ladies were pregnant by the time the photo shoot was scheduled.

And just a few weeks ago, another two couples had happy news.

Can you see faces in inanimate objects? Here are 15 fantastic...