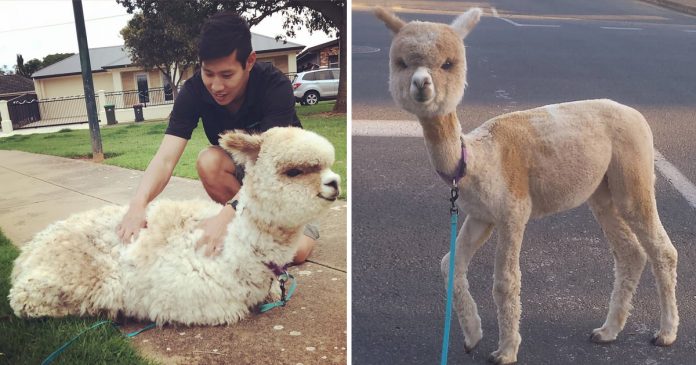 Adopted by Jeff Cheng and his wife, Sophie last year, Alfie the adorable alpaca is not your average pet.

Cheng first saw Alfie while he was driving through a local suburb in Australia. Out in a walk with his owner who seemed quite bored, Alfie caught Cheng’s eye that very moment. When he excitedly told about it to his wife and looked up the logistics of keeping an alpaca as a pet, Sophie just thought that is was quite a funny fantasy.

“We laughed about the possibility of getting one. There’s no way we’d actually get one and agreed on that sentiment. Little did I know that Jeff continued his research,” recalled Sophie.

Cheng’s research started on Instagram and led him to an alpaca farm a few weeks later.

Sophie came home to find a new addition to her family and had mixed feelings but wasn’t particularly angry.

“I was so shocked that I didn’t really know what to say or what to think. I wasn’t angry at Jeff because he’s always taken full responsibility for all of our pets (I don’t have to do anything), but I was a little apprehensive,” said Sophie.

Not long after, Sophie sensed a strong connection between Cheng and Alfie and she developed her own bond with the cute little alpaca too. They even created an Instagram account for Alfie and it’s been receiving overwhelming love ever since.

Meet Alfie, the adorable alpaca who lives in the suburbs of Adelaide, Australia.

Alfie’s clearly enjoying his trip at the beach.

He loves walking around the block too.

How can you not love this adorable fluffball?

“Better read this and make sure Cheng is raising me right.”

Most importantly, he enjoys cuddling with Cheng and loves his owner just as much as he loves him.