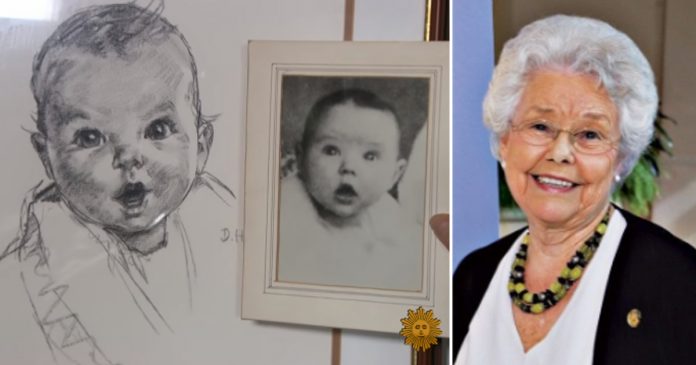 Remember the sketched image of a cute baby that appeared on Gerber’s baby food jars and other products for nearly nine decades ago? It turned out that the Gerber baby model is still as adorable as the original drawing!

You can see the cute baby logo at any Gerber products.

Ann Turner Cook is an accomplished mystery writer who was also an English teacher won a Gerber brand contest in 1928. In 1931, the charcoal drawing of young Ann showing a wide-eyed, innocent-looking baby with her lips opened in a look of wonder completed by her neighbor Dorothy Hope Smith became Gerber’s official trademark.

Young Ann was only a few months old when Smith made a sketch of her from a photo similar to this one.

The artist wanted to transform the sketch into a more complete art if she won the contest, but the judges loved the original sketch so much that they demanded it to be the official face of Gerber brand. But no one outside Ann’s family is aware of the Gerber baby’s identity.

In 1978, Gerber finally decided to reveal the real face behind the brand for so long and you can definitely see the resemblance!

At the age of 92, Ann is just as lovable as her young self. According to her family member, An has always considered her role as a Gerber baby as something unique that draws people together.

Over the years, Ann had the privilege to be introduced to Gerber babies who have also been chosen to represent the brand such a this adorable 1-year-old Lucas.

Are you surprised that the original Gerber baby is now 92 years old?

Barron Trump is just 13 but he is almost as tall...