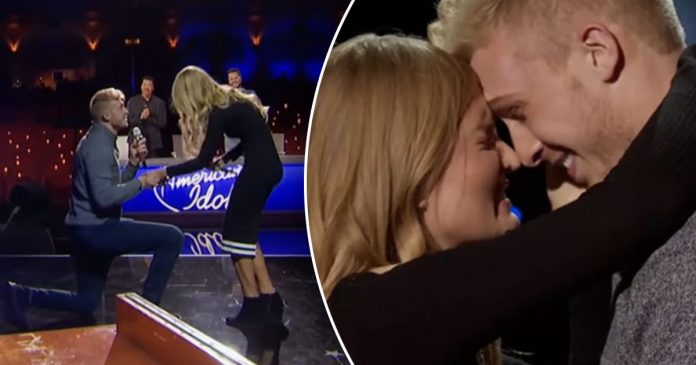 The 23-year-old Johanna Jones from Las Vegas, Nevada was so delighted to make it to the next round of American Idol, but quite dejected when her beloved boyfriend Matt can’t join the happy moment.

Busy taking final exams for his last semester of school, Matt was so upset about not being able to cheer on Jones that he even cried.

Matt and Jones are each other’s best support system.

“He’s the most supportive, loving, awesome guy I’ve ever met. I don’t want to get ahead of myself, but I think he’s probably the one,” said Jones.

Despite Matt not being there to support her, Jones still gave her best and earned a standing ovation from the judges for her powerful voice.

But that’s not the best part just yet.

After finishing his exams, Matt was so determined and drove 11 hours so that he could surprise Jones on stage. He appeared on stage after Jones’ performance and introduced himself to the crowd.

Matt suddenly proposed to his girlfriend—making her speechless and of course, in tears.

Matt came for a surprise!

“I couldn’t be here all week because of exams, but I couldn’t wait another day,” said Matt when he got down on one knee and asked Jones to marry him.

Jones was clearly not the only one in tears as the judge Katy Perry was seen had a meltdown as soon as she realized what happened on stage.

“Why won’t someone love me like that?” said Perry joking as we all know that she just got engaged to Orlando Bloom in February.

“That was the ugliest cry of my life.”