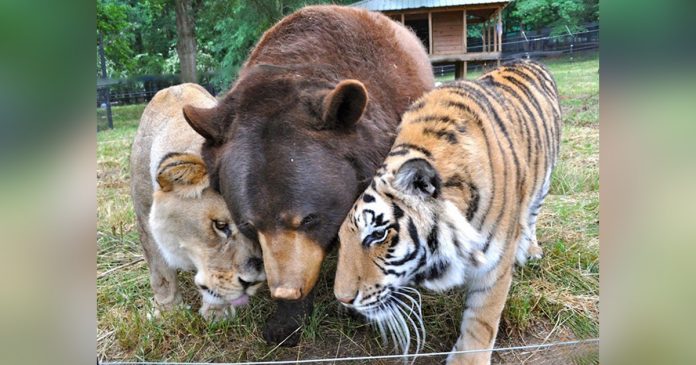 This bear, tiger, and lion have the most unlikely relationship ever—they’re friends and not preys-predators!

These animals would never coexist in the same place in their natural wild habitat, but Baloo the bear, Leo the lion and Shere Khan the tiger have spent more than 15 years coexisting at Noah’s Ark Animal Shelter in Georgia very peacefully.

Basically brothers for life, the animals were rescued in 2001 from the basement of a house in Atlanta during a police drug raid.

Little did they know, that’s the beginning of their amazing friendship.

Baloo, Leo, and Shere Khan were kept in the basement in a very terrible condition and Baloo even had to have surgery to remove an ingrowing harness that hadn’t been adjusted as he’d grown. Amazingly, that’s probably the only time the trio has been separated.

Haven’t left each other’s side for 15 years, Baloo, Leo, and Shere Khan happily spent their days together every single day after the bear’s surgery. Grew together and always had each other during tough times, the trio is completely inseparable.

These unlikely friends are inseparable.

And very affectionate towards each other.

After being rescued, all the bear, the lion, and the tiger are too injured to be rehabilitated and returned to the wild, so Noah’s Ark Animal Shelter gave them a forever home at the sanctuary—and the trio seemed very happy about it.

Such a beautiful friendship.

Dog abandoned on the side of a road gives rescuer a...