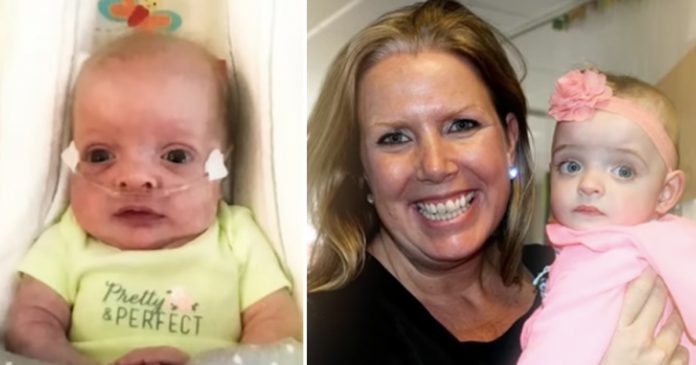 A nurse has adopted a baby girl who has was born prematurely at 29-weeks to drug-addicted parents, and they make such a loving family!

Just three months after baby Gisele was born, she was transferred to Franciscan Children’s Hospital, Boston, Massachusetts, where nurse Liz Smith was working.

Gisele was born premature and weighed only 1lb 14oz, and Liz took care of her at the hospital.

Liz had always wanted kids, but sadly was told she would never be able to have children naturally, as she wasn’t a suitable candidate for IVF.

Baby Gisele never had any visitors while was being cared for at the hospital’s neonatal unit, and that’s when Liz heard about her tragic backstory.

When Gisele was three months old in October 2016, the state took custody of Gisele. Just a few months later, Liz put herself forward as a possible candidate to foster her.

The little girl’s biological parents visited her less and less, and eventually, they were ruled unfit to care for her adequately.

Liz received the best news of her life when her adoption for Liz was finally completed in October 2018!

“A birthing day is a miracle. But adopting a child from miles away is destiny. That’s what brought you two together,” the judge said.

Now, Gisele is two and happier and healthier than ever with her new adoptive mom, Liz.

“She is thriving. She has a feeding tube where she still gets the majority of her nutrition through, but other than that, the specialist thinks she is just remarkable,” Liz told CNN.

“They can’t believe the strides she has made and how healthy and strong she is. Her resilience is inspiring to me and every day I’m amazed by her.”

“I have never been happier or stronger and just I couldn’t imagine life without her.”

We’re so glad Gisele is being looked after by Liz now, we wish them all the best!

After a Woman in Mexico Passed Away, More Than 20 Dogs Came to Bid Her a Touching Farewell

A Loyal Dog Accompanied His Owner who Fought Cancer for 9 Years! Lying on a Bed Next to His Master, They Passed Away on...

This lawyer received UNEP’s highest award because he successfully cleaned the...