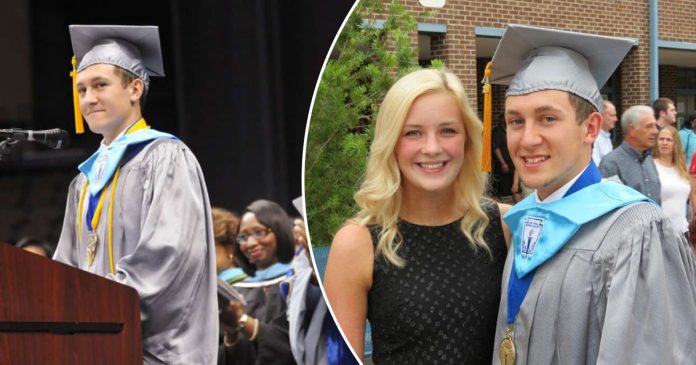 A valedictorian’s speech will usually leave us feeling inspired and proud of our friends’ hardwork and amazing achievements, but this one valedictorian speech had everyone in tears.

He lost his mother to cancer and raised in a homeless shelter together with his brother.

Despite his unfortunate life, Furlong never misses a class and even graduated from First Coast High School at the top of his class with a perfect GPA. With his simple message of never giving up, Furlong’s speech took the internet by storm when he talked about how he lost his mother at a very young age and had been homeless since he was 7 years old.

As life is already hard for him, Furlong continued to endure numerous hardships on his way to become the class valedictorian.

All his life, Furlong lived with the 4-word motto of ‘just never give up”.

In front of more than 500 graduates who mostly had no idea about his struggles, Furlong clearly mentioned that ‘giving up is not an option” before starting his valedictorian speech and said that he was able to accomplish what he did by having a purpose.

Furlong told the crowd that he made the grades he did because he has everything to lose. When others thought he had a normal life, he was constantly hopping from one shelter to another and went to bed hungry so many times.

That made him even more determined to work hard for a better future.

“I can’t even count the number of sleepless nights I spent alone on a cold plastic mattress. I cried, internally hoping that my life would soon wash away so I would not have to bear the hardships of a seemingly evil world.”

“I never gave up, no matter how bad I wanted to. To everyone sitting here before me, do not live a life without purpose. Deep down inside you know you have something to show. So whether you realize it or not, never make excuses, especially when you have a loving family able to give you what you need and want.”

Furlong and his girlfriend, Avery McCall. She must be so proud of him!

Furlong and his girlfriend plan to start a scholarship to help students in similar circumstances as his next step.

You can listen to his amazing valedictory speech here:

Such an inspiring and brave man. Congratulations, Furlong!