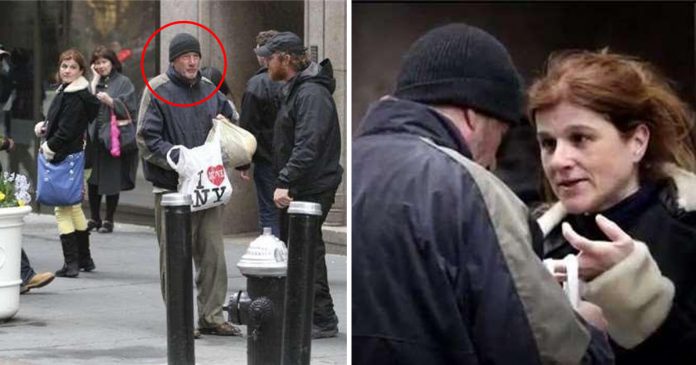 American actor Richard Gere did such an amazing job starring as a homeless man on a film set in Midtown back in 2014, that a sweet lady was totally oblivious to who he was and bought him a bag of food.

Richard is a hugely successful actor with an estimated net worth of almost $100 million, and has starred in hit films such as Pretty Woman and Hachi: A Dog’s Tale.

His transformation on set was so convincing, that nobody recognized the then 64-year-old on the streets of New York as he munched on a burger from a trash can dressed in worn out, grubby clothes.

Wandering around just outside Grand Central Station, he drank from a brown bag in front of oblivious commuters, sporting a scruffy look with unkempt facial hair and a ski cap.

He was actually in character for the movie “Time Out of Mind” and was astonished when the kindhearted woman bought a bag of food for him.

He didn’t tell her who he really was and smiled and accepted the food graciously.

She wasn’t the only one he fooled, however.

Speaking to the New York Post, 44-year-old Mizan Rahman, who sells newspapers on Park Avenue near East 42nd Street, said, “I saw him. He looked like a natural homeless guy. He didn’t seem like he was acting. He was an excellent homeless man.”

When Richard stuck his hand in the trash to look for food, Mizan was convinced.

“He was putting his hand in the trash. He looked like a real homeless guy finding something . . . like the homeless men I see in many different places,” he said.

The generous lady was reportedly a French tourist named Karine Gombeau, according to the New York Post.

“He was very touched . . . He said, ‘Ya know, she was like an angel’. He was in character, so obviously he was feeling like a guy who lives on the street,” Oren said.

“When she came over, he said he felt like an angel gave him a gift,” Moverman said.