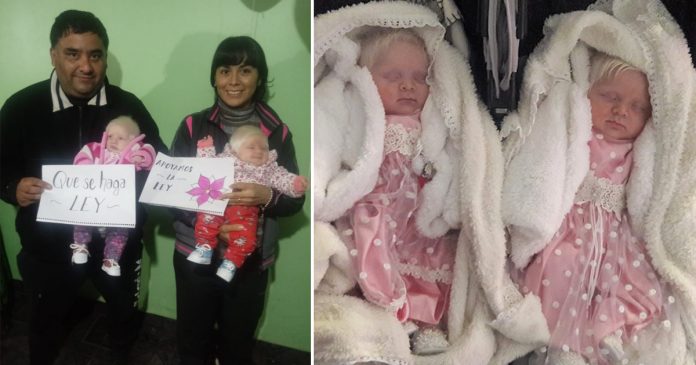 When Argentina’s first ever albino twin sisters were welcomed into the world, they became an overnight sensation.

Their parents were delighted to be blessed with twin baby girls and didn’t blink an eye when they discovered their condition—in fact, they were over the moon!

The twins, named Virginia and Catalina, were born in Tucumán Province, northern Argentina, and are the first of their kind to grace the country.

The adorable girls were born prematurely at 36 weeks and hospital nurses were so excited to finally meet them.

Jorge Gomez, their father told LV12 he and his wife felt extremely blessed by their birth.

“When they gave us the news that we would have two babies, it gave us a lot of happiness and when they were born and we saw that they were albinos, that happiness did not change at all,” he said.

Albinism is a rare pigment disorder that causes the hair, skin and eyes to have little or no color. This is caused by a lack of melanin, and the disorder is often associated with vision problems.

Approximately one in 17,000 people in the U.S. have the disorder, according to the National Organization of Albinism and Hypopigmentation.

But it is thought to be extremely rare for twins to both be albino.

These gorgeous girls will require extra attention and care as they grow up, as exposure to the sun and its UV rays will be harmful to their sensitive skin.

Luckily, they have a loving nine-year-old brother who will look out for them. We wish this adorable family all the best!