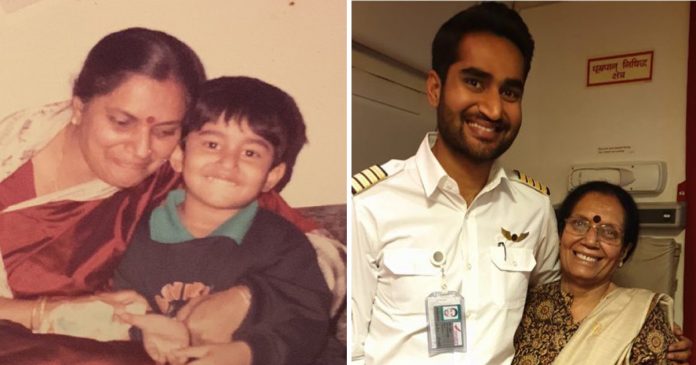 Former teacher Sudha Satyan was getting comfortable on her Air India flight from Delhi to Chicago a fortnight ago when she heard something which truly warmed her heart.

When the captain announced his name over the plane’s speakers, Sudha was immediately taken back 30-years. Back then, she taught a little boy who had introduced himself by the very same name—“Captain” Rohan Bhasin.

Astonishingly, it turned out he was the very same “Captain” sitting in the cockpit!

She asked an air hostess if she could see him. When they were finally reunited, her eyes glistened and she gave her now grown-up “Captain” a massive hug.

Following their coincidental meeting, Rohan’s mom shared sweet photographs of the pair. One from back in 1990-1 when Sudha taught him, and another from the Air India flight.

During Playschool admission, the teacher asked my son his name.

Nonchalantly he answered, "Capt Rohan Bhasin".
And he was just 3.

And today, the same teacher was enroute to Chicago.
And he was indeed the Captain. ??‍✈️#StudentTeacherReunion❤️ pic.twitter.com/nGAqZSKUnF

“#WarmsTheCocklesOfMyHeart….During Playschool admission, the teacher asked my son his name. Nonchalantly he answered, “Capt Rohan Bhasin”. And he was just 3. And today, the same teacher was enroute to Chicago. And he was indeed the Captain. #StudentTeacherReunion,” Rohan’s mom Nivedita Bhasin wrote on Twitter.

Sudha taught Rohan at a play school in Mumbai, and she and her husband, an engineer with AI, were close with Rohan’s family at the time.

It turns out Rohan’s passion to become a Captain from such a young age stemmed from an extensive history of flying within his family.

Captain Jai Dev Bhasin, one of the first seven pilots to become a commander in India in 1954 was, in fact, his grandad! His parents also flew with Indian Airlines.

This is #MyFirstBorn #CaptainOfHisLife #MyFavCopilot one who can't fly with me but one who's always by my side. Love my children both of whom love me back. #FeelingBlessed. #ThankfulEachDay pic.twitter.com/01HDMtl5Gc

The impressive family has clocked almost 100 years of flying between them.

Rohan was quick to start his pilot training, and in 2007 he had already begun his in-air experience as a co-pilot. He’s really ambitious and it shows!

We’re so happy they got to meet again and experience such a heartfelt reunion!

Chinese makeup artist can turn into anyone she wants, including Taylor...