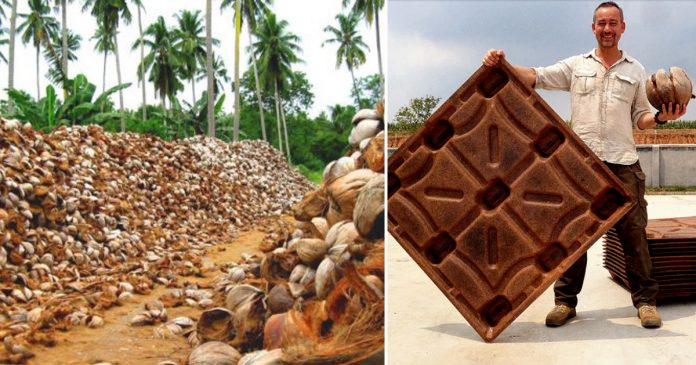 In Southern India, coconut trees are used extensively in all sorts of form. However, the coconut husks and shells were unfortunately not included and left useless on the roadside—blocking the drainage system, packing up the landfills and polluting the air when burnt.

Looking at this severe situation, a Dutch start-up company in Amsterdam called CocoPallet has found a perfect sustainable solution and worthy of replication in coconut-rich nations of South East Asia. They produce biologically processed transportation pallets from coconut husk that are completely organic, greener, cheaper and more compact than wood or plastic pallets.

85% of the coconut husks go to waste.

Has its root in a primitive Indonesian procedure that was practiced by only a handful, a plant-fiber scientist at Wageningen University Jan Van Dam discovered the technology of CocoPallet when an Indonesian man presented a prototype coconut pallet to him.

“Rock hard, wood-like board material from coconut husk? That was new to me,” shared Van Dam.

“We looked for improvements and came up with a technique where the ground up husk is pressed together at a high temperature.”

Van Dam launched a pilot project in the Philippines but failed for various reasons until he met Michiel Vos. With technology originally developed by Wageningen University researchers, the founder Michiel Vos has improvised the technique by using coconut husk creating a world-class product with equal finesse and sturdiness—boosting a circular economy at the same time.

Both environmentally and economically, CocoPallet can indirectly prevent the cutting of around 200 million trees per year in the Netherlands. Made entirely from discarded coconut husk in Asian countries, it negates the use of any toxic and expensive pesticide treatment for the trees.

Estimates show that CocoPallet is using almost around 50% of coconut waste and it is a fire and termite resistant product too.

Already popular among Asian exporters, CocoPallet is producing the pallets in Sumatra, Indonesia from local plantations—eliminating the whole burden of transport cost and creating extra income for local farmers.

The founder hopes to expand his business further to rid the coconut waste of other Asian countries in the most eco-friendly way possible.

Old Man Adopts an Abandoned Baby; Becoming an Influencer when She...