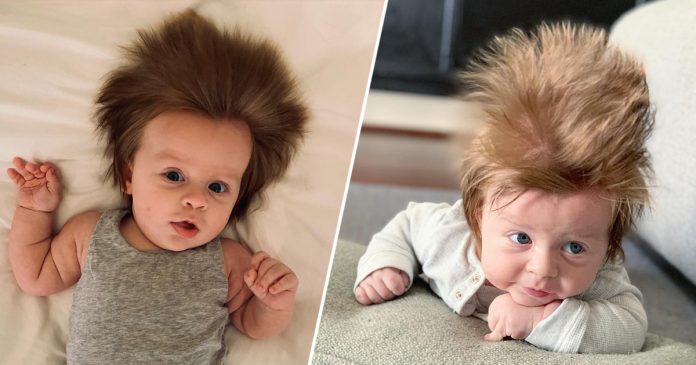 People often associated shiny and healthy hair as their crowning glory, but this four-months-old little boy Boston is already living every man’s dream.

Boston’s luscious hair was so impressive that his mother Tara Simich claimed it stops people on their tracks. That’s probably because the adorable baby boy looks like he was wearing a wig upon first glance!

Born on December 4, baby Boston from Perth, Australia was gifted with a head full of thick and luscious hair just like his father. In the following months, Boston’s hair just kept on growing into a glorious untamed bouffant that it is today.

As Boston went viral, his hair has been described as hair goals by many on social media. Tara who runs a fitness program also revealed that Boston made his debut into the world already sporting his signature quiff.

“Mostly people are in complete shock because he’s so little, they can’t believe the hair is his. But it is,” said Tara.

Babies often lose their newborn baby hair around the six-month mark, but it seemed that Boston has nothing to worry for now. Because of his amazing hair, Tara has been having people asking her what kind of hair product did she use on her adorable son.

Unfortunately, we can’t steal the secret to that amazing hair because he was born with it.

Tara regularly shares photos of Boston’s amazing luscious hair on Instagram, so make sure to follow her if you want to see more of that gorgeous hair!