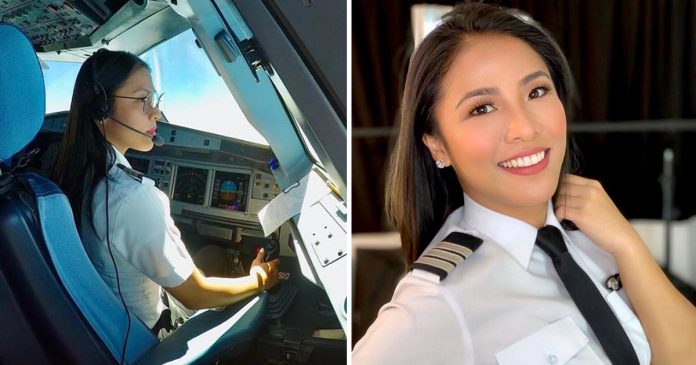 Meet Chezka Gonzales-Garrido, the gorgeous and newly-qualified pilot from the Philippines who is inspiring all aspiring female pilots out there!

The 30-year-old originally graduated from FEU with a degree of Bachelor of Science in Nursing, all while balancing time as a new mom.

But she always had her heart set on becoming a pilot one day, and decided to make a career change.

She trained as a flight attendant for six years, but never gave up on her dream of flying an Airbus 320!

In an inspiring social media post, Pilot Chezka posted two photos side by side. The first image was taken when she was still a flight attendant and she was sitting on the co-pilot’s chair and wearing his hat. She took the photo to motivate her to become a pilot one day.

The photo on the right shows her beaming with happiness as she has finally achieved her goals—she’s now known as Pilot Chezka! She did it. She’s now a licensed pilot who flies private planes.

She shared on Facebook, “Picture on the left was taken 6 years ago when I asked the co-pilot if I could sit on his chair, borrow his cap and take a picture…. 6 years later , it’s the same chair, but the cap is now mine, no need to ask permission to sit and i can now take unlimited photos. Do you think it’s time someone borrow my cap?”

3 bars on my shoulderspershing cap on my headand wings on my chest.These accessories that I wear entail a lot of…

Posted by Filipina Pilot: Tales from the skies on Thursday, April 4, 2019

Pilot Chezka has worked extremely hard to get to where she is today, and couldn’t be prouder of her achievements.

“I could say one of the most important days of my life…letting me be a full-pledged First Officer. Thank you Lord for all the blessings.

“I am excited for more and more blessings so that, I, too shall be a blessing to others,” she wrote in an inspiring Instagram post.”

She’s even been lucky enough to fly her parents to Malaysia as her “VVIP” passengers—they must be so proud of her!

She also won a prestigious award for her talents! She was one of the awardees of ‘Istorya ng Pag asa’ (Story of Hope), organized by the Office of the Vice President of the Philippines and Far Eastern University.

It hasn’t all come without difficulties, though. Last month, in an interview with preen.ph, she said she was often discriminated for being a female pilot.

“The passengers would ask, ‘Is it safe? Because [the pilot] is a woman’,” she explained.

She never lets anything get her down though, and has some inspiring words of advice for anyone who wishes to become a pilot one day!

“For the aspiring pilots out there, strike whilst the iron is hot! Let your passion roar like the engines of an airplane. Turn your energy into productivity and the reward would be all worth it,” she told Caravan Pilots.

“I’m telling you, it only gets better and the learning process is fun so do not falter, keep your head up and keep inspired!!”