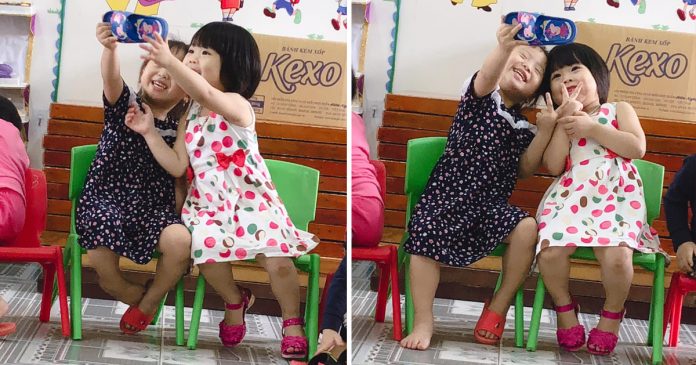 Heartwarming footage of two adorable girls pretending to take selfies with a slipper has gone viral on social media.

They seem to know all the most adorable poses and even pretend they can see the snaps on the slipper!

Facebook user Minh Phương shared the precious clip on April 3, and it has since received over 11 million views and has been shared 236,000 times.

They’re naturals! They pose with the peace sign while flashing adorable smiles.

Look how cute we look!

They’re so imaginative and pretend to click a few buttons to inspect the photos they have taken. So sweet!

The girl in the blue dress then leans back and holds the slipper up to take a photo of her friend in the white spotted dress.

Because the cute girl in the blue dress is missing a shoe, it appears as if she’s using her own slipper for the fake snaps!

But internet users soon amused themselves when they noticed the blue slipper was in fact from her other friend sitting to her right in pink.

Let me take another one!

Take a look at how social media reacted to the heartwarming video.

We can’t get over how precious these two little ones are!