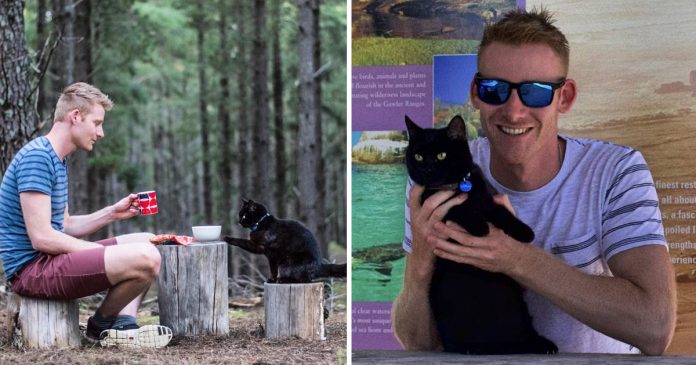 Each of us has a life purpose and it is the same for a man called Rich East. When others strive to find the motivation to achieve for a successful career, East decided to quit his job and sells everything he had just to travel.

One day, East decided to stop working and sold all his possession including his house and travel the world with his buddy. The best part of the journey, the buddy accompanying him is a rescue cat, Willow.

East and his cat, Willow.

She gets comfortable inside the van.

As both of them reached South Australia, the cat marked the official completion of visiting all 6 states and 2 territories of Australia. They also managed to sail the Great Barrier Reef and camped on mountains from Bourketown, Queensland all the way up to the Northern Territory.

Looking at his adventure that includes a cat, East said that some people find it peculiar. But he explained that Willow never complains despite all the trekking and spent most of her time around the camp without any issue when she’s on a collar.

Willow also has a special tracker on her so that East can easily keep track of her.

“I’m so proud of Willow. She’s the cat that made my van a home and the whole of Australia her backyard. She’s the best travel buddy ever!”

According to East, they almost made it home but far from stopping anytime soon. They’ve now adapted to life on the road and are very satisfied with their peculiar lifestyle.

We foresee more miles for this duo!

Make sure to check out their site if you can’t get enough of these adorable buddies.