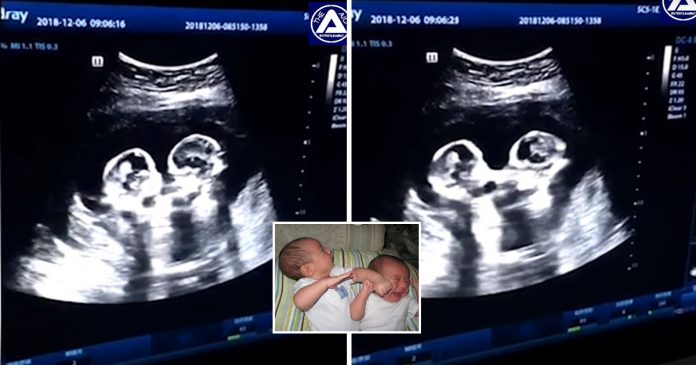 Chinese identical twin sisters have been spotted ‘fighting’ each other in their mom’s womb during an ultrasound scan, and the video has gone viral.

Nurses spotted the astonishing scene during the mom’s four-month scan, as it appears the pair were punching and kicking each other in the womb.

The viral footage was filmed by their dad, 28-year-old Mr Tao, who went with his mom to the check up in the city of Yinchuan in China’s Ningxia Hui Autonomous Region.

After he uploaded it to the short-video app Douyin, the clip soon took the internet by storm.

The energetic twin sisters have since been born happy and healthy, and have been nicknamed after their mom’s favorite fruits—Cherry and Strawberry—how sweet!

Since the video was shared online, it has been liked 2.5 million times and has received over 80,000 comments.

The cute sisters already have fans around the world!

“Whoever wins [the fight] can be the elder one when they are born,” one person joked on the app.

While another added, “They fight in [their mother’s] belly, but will love each other when they are born.”

Their proud dad was moved by the incident and said they even hugged each other when their mom was going through an amniotic fluid test.

“We were so touched. The babies were so small and they knew how to look after each other. I believe they will live with each other in harmony when they grow up,” Mr. Tao said.

The cute sisters shared the same placenta and amniotic sac with their mom, he added. This is, in fact, a rare and risky pregnancy, which is referred to as monochorionic-monoamniotic or Mo-mo twins for short and affects 1, in 35,000 to 1 in 60,000, reports TwinsUK.

Sadly, there is usually only a 50 percent chance or survival past 26-weeks.

But thankfully, these twins were born on April 8 at 32 weeks via an emergency cesarean section after one of their heart rates suddenly dropped.

“The babies have been born safe and sound. It’s their parents’ fortune as well as my fortune. They are the first pair of Mo-Mo twins our hospital has successfully delivered,” said He Lin, a deputy director at the General Hospital of Ningxia Medical University.

Watch the duo in action in the video below: