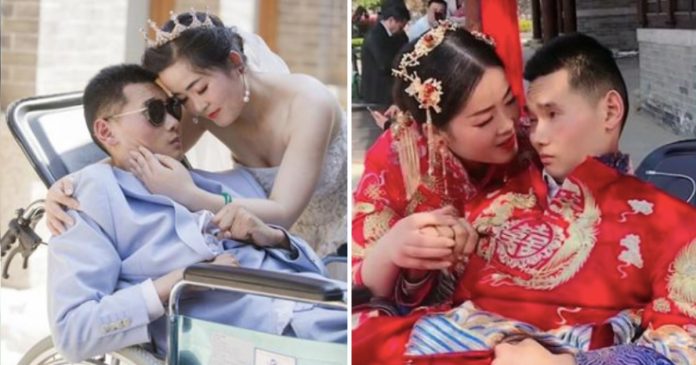 When this lady found out the love of her life might never be able to walk again just before their wedding ceremony, she was devastated.

But Zhang still took care of him every single day hoping he might recover. She even arranged the most touching photo shoot to prepare for the ceremony.

The pair first started dating in 2007 when he was working as a construction worker renovating houses. But their relationship was mostly long distance, as his job meant he had to work outstation often.

Still, their love blossomed and they called and texted each other all the time.

Just three years later, the adorable pair officially tied the knot, but decided to wait to save up so they could have their wedding ceremony.

They promised one another to work hard together to achieve their dreams.

As they didn’t have a house yet, Zhang’s husband worked extremely long hours. He finally found a small cosy home for them, which he bought for 200,000Yuan (US $30,000).

Tragically, Zhang’s husband was involved in a terrible accident just before the wedding. While at work, he was electrocuted and he was left paralyzed.

Since the accident, he hasn’t been able to respond, talk or walk. He was in a vegetative state and even his doctors had given up hope.

Doctors told Zhang there wasn’t any treatment for her husband to help him recover.

But their love was as strong as ever, and Zhang refused to give up on her husband. She took him home from the hospital and looked after him herself every day.

Just to stimulate his muscles, she would massage his body several times a day and hand feed him. She talks to him every single day, even if he might not be able to hear her.

Despite the toll these tasks took on her physically and mentally, she never once thought about giving up on her beloved husband.

She has been taking care of him for the past four years and asked family and friends to help with her husband’s medical bills.

Since he seemed to be in a slightly better condition than before, Zhang decided to arrange a touching pre-wedding photoshoot, and the pictures are so heartwarming.

Although she had no idea if he would ever ‘wake up’ again, she wanted to capture the love they have for one another.

Zhang is dressed in a stunning white wedding dress, while her husband wears a stylish pale blue suit on his wheelchair.

At the end of this month, they will be having their long-awaited wedding ceremony in their hometown!

Zhang hopes her husband will one day be able to recover and stand up by himself.

Congratulations to Zhang and her husband—it’s not every day you hear of such pure and unconditional love. We hope he can make full recovery soon!