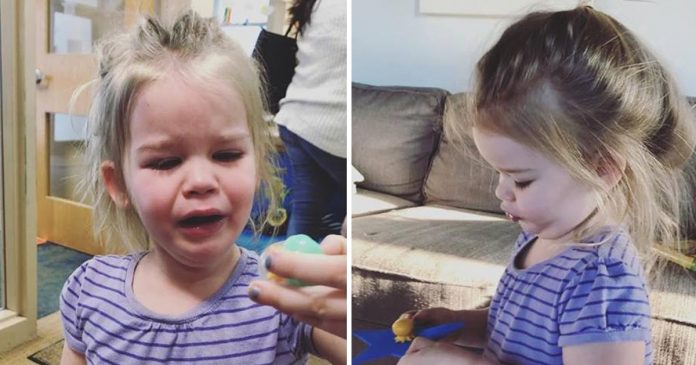 When children are crying or throwing tantrums, parents usually choose to give in to them just to make sure they do not make a scene in public. But this one woman shares the best advice as a mother herself.

She took her daughter Tessa to the doctor and the pediatrician office gives a token which can be used in a vending machine filled with fun little toys as a reward for the little girl who successfully got her finger pricked.

Tessa wanted a little blue octopus from the toys vending machine, but when she put in her token, an orange octopus came out. So the little girl was extremely upset, she melted into tears and screamed her thought.

“I want the blue one! Not the orange one!” said the little girl.

Looking at that, a kind nurse offered her another token to try again, but the mother refused for the best reason.

“A kind nurse motioned to me and offered to give her another token to try again and I almost took her up on it since Tessa was turning into a scene. But I said no thanks, and here’s why,” wrote the mother.

“Our kids need to learn what to do with their disappointment. We can’t keep them from it. Our world and the people around us are filled with it. Everything in us as parents wants to protect our children from hurt and disappointment, but if we’re constantly rescuing them from it then we’re really setting them up for failure once they hit the real world.”

“Let them feel disappointment, but be there for them in the midst of it—tell them we’re sorry, help them process why they feel that way and offer suggestions for alternatives.”

“It would have been easier for me and everyone else in that office to just keep giving her coins until she got the blue octopus, but it would have done the opposite for Tessa in the long run.”

“She walked out crying with that orange octopus and not 2 hours later was playing happily with it, and had named it the cutest name ever—Squiggles,” said the mother at the end of her words.

Definitely something worth our deliberation. Bless this momma for sharing her advice!

Credit: Facebook/Story of this Life