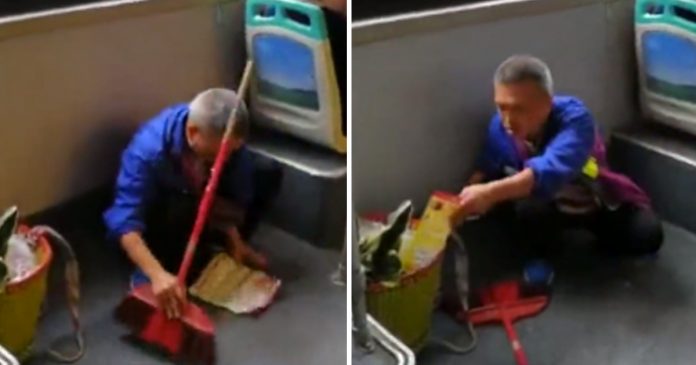 Public transportation like train or bus is one easy way to commute from one place to another. However, sometimes people seemed to forget that the bus was meant for public use and often ignore simple unspoken rules like keeping it clean. But this one old man is definitely one of a kind.

One day, a commuter was riding a bus in Guizhou, China and noticed an old man inside the same bus. The old man was carrying a huge pot with him and it looked quite heavy. When the bus was passing through heavy traffic, the old man tried to lean against the wall.

Unfortunately, the bus put on a sudden brake causing the old man to accidentally spill the soil he’s carrying all over the place he was standing. 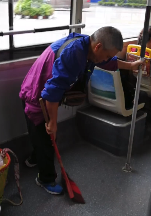 Some people might just ignore it, but not that old man. He was concerned that the spilled soil will be affecting other people on the bus so he knew he had to do something.

The old man quickly finds a broom inside the bus and slowly swept the bus floor. 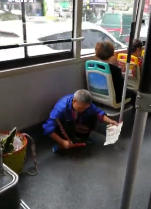 He carefully cleaned it and wobbly poured the dirt into a small dustbin while the bus was still moving. Even when he’s done, the old man kept on checking and sweeping the bus floor, again and again, to make sure there’s no dirt left.

Because the bus was moving, he sat down to sweep the dirt. 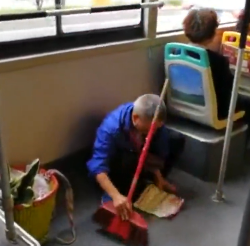 After the recorded video of the old man on the bus went viral, a lot of people have been praising his civic consciousness. People on the internet also claimed that indeed a person’s good character has nothing to do with academic, age nor money.

The old man poured all the dirt into the dustbin and kept everything clean again. 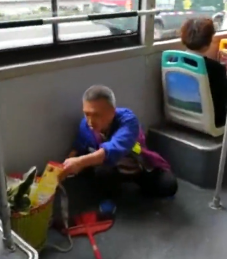 He is such a good example for all other commuters.