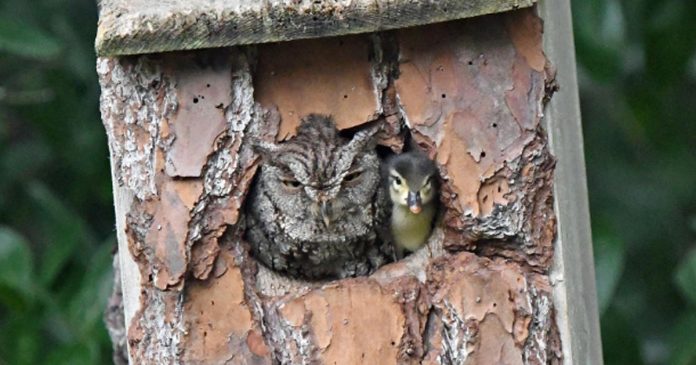 An adorable photo of an owl raising a duckling in its bird box in Florida has gone viral—the lady who initially spotted the duo couldn’t believe her eyes at first!

Wildlife artist and photographer Laurie Wolf, from Jupiter, a town along the southeastern coast of Florida, assumed the eastern screech owl in her backyard had its own baby owl hatchlings.

But when she took a closer look, she noticed an adorable yellow ducking sitting next to the owl. It turned out the owl was actually raising the baby bird as its own! How sweet!

They appear to enjoy being in each other’s company as they peek out from Laurie’s bird box.

Laurie was completely stunned by the strange sight.

Her first thought was that the owl might eat the baby duckling, and she contacted a bird expert immediately about her fears.

When they said that her fears could come true, Laurie convinced a local wildlife sanctuary to take care of the duckling.

All she had to do now was catch it! But as she tried to catch it with her husband, it plopped out of the bird box and towards a pond nearby. It hasn’t been seen since!

“I don’t think I’ll ever experience anything like that in my life again,” Laurie said.

“’You could think of it as not keeping all your eggs in one basket. If you spread your eggs out, then your chances of passing on your genes are increased slightly, especially if you lose your own eggs to a predator.

“We know this occurs, but we really don’t know the frequency. So I was happy to see another example of this.”