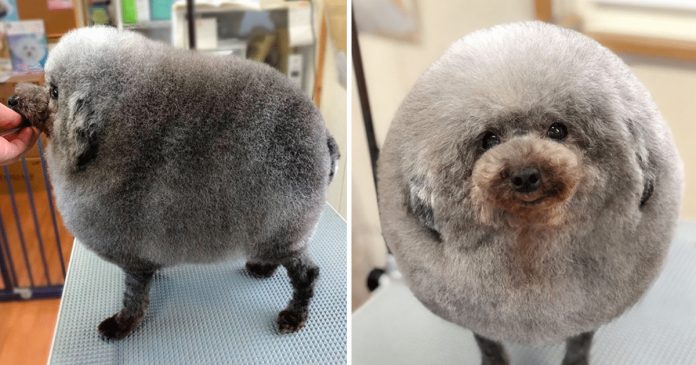 Dogs are indeed one of the best pets we can ever have and they’re just adorable whatever they do. All dogs are beautiful but we can’t deny that some dogs are cuter than others with some extra grooming—just like this one.

This toy poodle dog called Sesame went for a haircut and he came back looking like a complete fluffball. After recently groomed by a Japanese groomer and salon-owner Yoriko Hamachiyo, Sesame was capturing millions of hearts with his adorable haircut.

Isn’t he the fluffiest dog you’ve ever seen?

Thanks to his new hairdo that closely resembles a cloud, Sesame is now being referred to as The Cloud Dog, The Dog Cloud, The Fluff and more by his new fans all over the internet.

Clearly loving his new incredibly cute cut too, the fluffy dog began posing for the camera after switching his style. With the fluffiness that is almost too much to bear, Sesame’s cut is especially round.

With his cute photos posted on Instagram, people can’t help to fall in love with Sesame and dream of hugging this furball. No matter what angle the picture was taken, the dog still looks like a cloud of fluff.

After looking at the pictures, many commented that they wish that they had dogs of their own so that they could be groomed into a Sesame-lookalike.

I mean, who wouldn’t want a dog after looking at this?

This fluffy cloud will surely brighten up the rest of your day!

A blind dog’s contagious positivity that taught us how to ‘live...