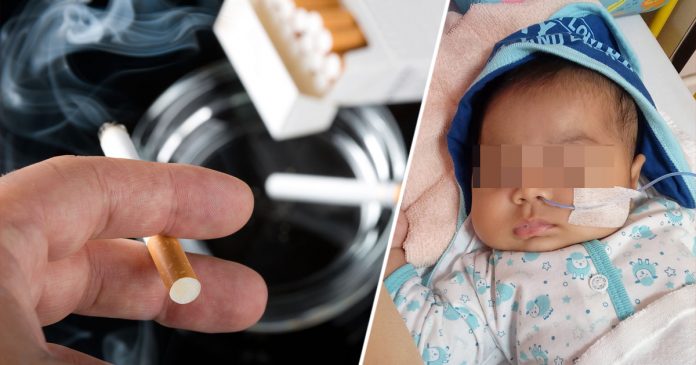 The no-smoking sign is a familiar sight for all of us and surely and the majority of us are aware of the health concerns for smokers too.  However, the health risks related to secondhand smoking appears to be on the rise.

Baby Delisya is being admitted for treatment due to lung infection.

According to her post updated on 17th April, a 2 month-old Delisya has been hospital-bound for four consecutive days. Baby Delisya reportedly vomited blood twice, hence was rushed to the emergency department of a nearby hospital.

Following that, an X-ray and ultrasound examination was conducted. The doctor then confirmed the diagnosis of the infant’s condition which is a severe lung infection. The baby is estimated to have been suffering from the infection for three weeks now.

In addition, the mother further explained that her daughter has been defecating for 20 times a day. How excruciating! Evidently, the infection caused swelling in Delisya’s liver and spleen. As of current, the infant is still hospitalized for treatment.

Delisya’s mother also extended her sincere plea to all the smokers out there.

‘Please consider the consequence of your action on the people who don’t smoke. The effect is much more severe. My baby is sick for many days now’, she wrote on her Facebook post.

We, humans, tend to be mindless about the things we do on a daily basis. We do not think that our actions might affect others, more often in harmful ways than in a positive manner.

Hopefully, this story serves as a reminder for us to be mindful and responsible. Smoking kills. Keep that in mind the next time you light a cigarette.

As for Baby Delisya, we pray for her speedy recovery.